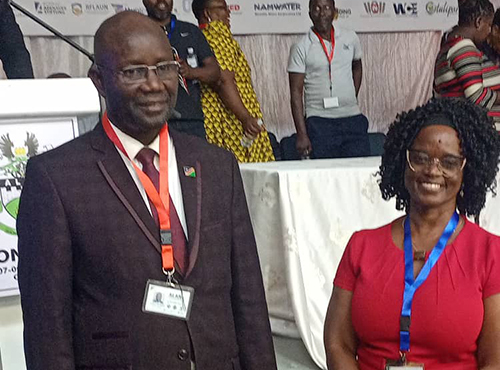 The election of new office-bearers was confirmed during the association’s congress at Oshakati, which ended over the weekend.

During the official opening on Friday, urban and rural development minister Erastus Uutoni said challenges are upon the shoulders of the new Alan leaders as they only have two-and-a-half years to deliver. “Councillors are acting like officials, while officials are acting like councillors. If it will go on like this, fighting each other, there will be no place for development,” he stressed.

According to Uutoni, the Alan congress was a perfect platform to stimulate discussions on topics that give relevance to local government in Namibia, and facilitate best-practice approaches on how to co-create liveable neighbourhoods as a positive vision and element of inclusive, suitable urban development in Namibia.

“This suggests that local authorities should be at the forefront of ensuring planning, policies, standards and guidelines to support best-practice developments for their communities,” he said. Uutoni urged leaders to stay true to their mandates as elected representatives of the Namibian people. “If we do not rethink and combine our approaches and practices for effective service delivery, we will fail the institutions we serve and the electorate at large who elected us into office,” he added.

“Therefore, it is my sincere expectation that this congress will develop strategies that enhance the capacity of local authorities to deliver quality services to all our people,” he added. There has been an increase in urbanisation since 2018, with more than 50% of Namibians living in urban areas. It is also projected that by 2030, up to 70% of Namibians could be living in urban areas.

“The United Nations’ projections estimate that by 2050, up to more than two million could be living in urban centres under the jurisdiction of municipal or regional governments,” Mbumba noted. -vkaapanda@nepc.com.na