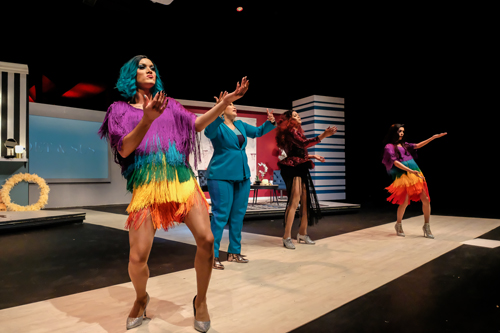 As theatres are slowly reopening, most of the new works are headed to streaming services rather than the big stage.  One of the local theatre productions that just premiered online recently is Boet & Sus.

Written and directed by award-winning actress and theatre-maker Lize Ehlers, the production is partly a talk show and part drag show, which aims to razzle-dazzle on the coloured community of Namibia with a piece representing its heritage, reality, and dreams.
Boet & Sus is the first National Theatre of Namibia (NTN) production to premiere online and this move is also a way of the theatre embracing technology and change.

The production will be streamed online as a recorded product for longevity purposes.
Although the play is Afrikaans, the streaming footage will be supported by English subtitles to accommodate international audiences and non-Afrikaans speakers.

It is executively produced by the NTN under its Premiere Production Programme, which caters for world-class professional theatre works for diverse audiences in Namibia.

The cast includes award-winning actor Adriano Visagie ‘Boet’ as the co-lead, while Ehlers plays the lead role of Sus, an open-minded coloured woman who is an ally to the LGBTQI+ community, and Rodelio Lewis and Roberto Meneguzzo who portray the roles of drag queens Mavis and Gigi.

The show would also not be a success without creatives such as Marchell Linus who is the choreographer, Imms Nicolau as the musician, Martin Amushendje with supporting visual documentation, Miss Jey Arts as the make-up artist, and costumes by Ingo Shanyenge.
“The authentic dialogue includes swearing and curse words. At first, the work was a 100% family-friendly piece, but then the authenticity was questioned, especially for a play about coloured and ‘Baster’ people in contemporary Namibia. It was my decision as writer and director to stay authentic and be true to the community we are talking about,” said Ehlers. Tickets for the play are available on the NTN website and live streaming ends at the end of this month.
– ashikololo@nepc.com.na