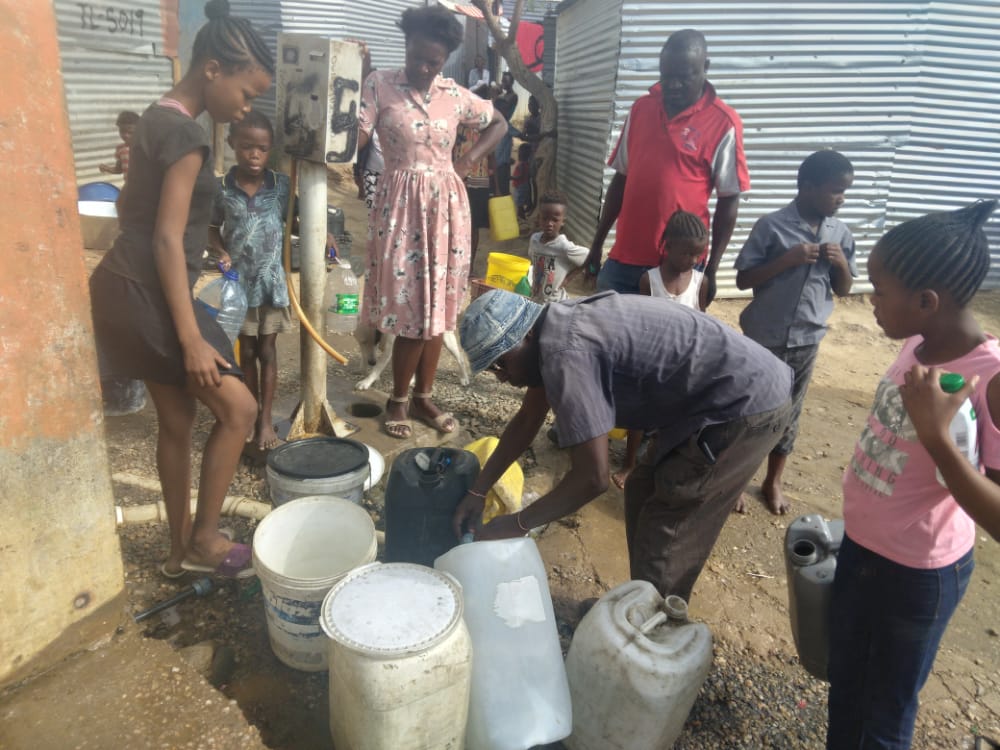 The Windhoek municipality is concerned about the high incidents of theft and vandalism of its infrastructure in informal settlements.

The residents’ actions also led to the wastage of water and the closure of the toilets.

On Friday, New Era found a group of residents flocking to three water points where water meters were stolen at midnight in the Greenwell Matongo informal settlement.

Those who were competing for free water at the taps informed New Era that those who steal the water meters sold them to the local scrap yard. The water was running heavily with nothing stopping it.

Community leader Nelago Kashi indicated that it was around 03h00 when she went outside to visit the toilet and stumbled upon a strong stream of water.

“I was shocked to see both water points having water running. I ran back to my shack and called the city’s emergency number. There was no answer until I got hold of the regional councillor at 07h00. The water was just running since then. He contacted fellow councillors at the city who then informed the officials,” she explained.

New Era arrived a few minutes before 09h00 and water was still flowing with residents competing to fill up their 20-litre containers.

Kashi told this publication that when the officials showed up, the only solution they had was to close the pipe but that caused the closure of the public toilets.

“Now that the pipes are closed, the toilets are also not working. The meter was connecting the pipe to the tap water and toilet. The tap is working but the toilet is not flushing. In the areas where the meters were stolen a long time ago, the toilets were closed and people had to go back to the riverbed,” she explained.

Another resident said some toilets were closed due to vandalism as thieves tried to steal toilet pots to sell.

“Now we only have a few toilets that are functioning and are far from one another. It is likely to be that our women are going back to the riverbed and will be attacked there at night by heartless people,” said another resident who prefer not to be named.

Another female resident is also agitated that those who are vandalising and stealing properties are not only hindering the development but also putting the residents in an unhygienic situation. “Imagine people using the toilet that is not flushing. If the toilet happens to be full, people will soil on the floor. It will be bad and will cause diseases such as Hepatitis E. This disease will be back after it was suppressed,” she concerningly shared.

Councillor Fransina Kahungu, who was also present, explained that some residents do not understand the negative impact that comes with their decisions.

“I am disturbed by the fact that residents are not aware of the negative impact caused by the vandalism and theft of municipal infrastructure. The fact that residents are stealing water meters to sell elsewhere results in the wastage of water. The municipality pays water bills to NamWater. Instead of the municipality spending money to improve infrastructure and basic services, it will spend a lot of money to pay huge water bills to NamWater,” she said.

She added that people who are stealing water meters expect the municipality to replace them.

“Instead of the municipality spending money on other infrastructure, they are now going to spend money to replace those stolen and vandalised materials.”

“It cannot continue this way. Vandalising and stealing municipal infrastructure comes with a cost. That means that the municipality is going to use the money to replace those water meters which cost around N$5 000 to N$6 000 each. Where is the money going to come from?” she asked.

She cautioned the residents that the city will investigate the matter and those who are involved will be brought to book.

One of the residents said in Havana alone, 18 water meters were reportedly stolen.