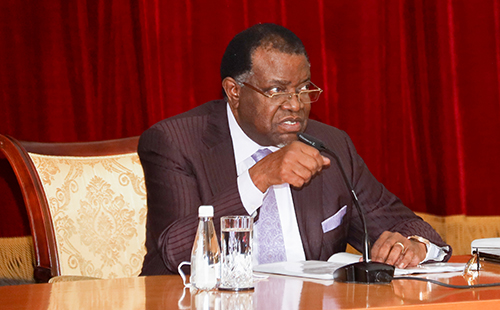 President Hage Geingob will be witnessing the completion and confer order, decorations and medals to deserving Namibian Defence Force (NDF) members at Uulunga-wa-Kolondo in the Oshana region today. The NDF conducted the Joint Field Training exercise codenamed ‘Exercise Khan Strike II’ in the area of Uulunga-wa-Kolondo.

Nambahu stated that this is the second phase of Exercise Khan, which was conducted in the mid-2020 at Karibib Air Force shooting range and is part of regular exercises the NDF conducted since independence.

“The main objective of the exercise is to enhance joint training and interoperability within NDF, to evaluate and test combat readiness of troops and equipment, project firework, practice logistic support in the field and appraising combat skills as well as to test officers and troop competencies in conventional warfare,” he said. – vkaapanda@nepc.com.na