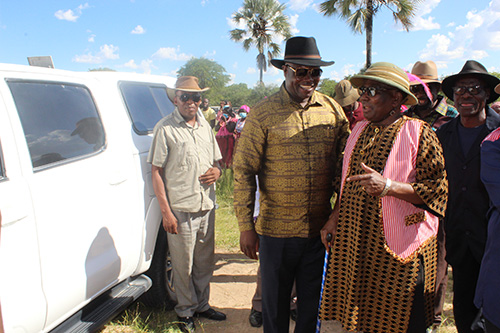 A delegation of senior and junior traditional councillors of the Ondonga Traditional Authority accompanied Nangolo to Nelulu’s home village of Etomba in the Ohangwena region. During the visit, Nangolo called on the Ondonga and Oukwanyama traditional leaders to foster unity and work towards national peace and stability.

“Peace, unity and harmony in our respective communities should serve as the cornerstone in the process of building a prosperous and inclusive nation,” he said. Nangolo explained he visited Nelulu because he was like a father to him. Nelulu had officiated at the installation ceremony of Nangolo on behalf of Oukwanyama Queen Mwadinomho Martha Kristian Nelumbu.

“I want our bond to continue as it is, and hope it will never break. The Oukwanyama and Ondonga relationship came long ago and shall continue,” said Nangolo. Nelulu said the relationship between the two traditional authorities is unbreakable and it will continue for many years to come. “I am very happy with what is happening today,” he said thankfully.