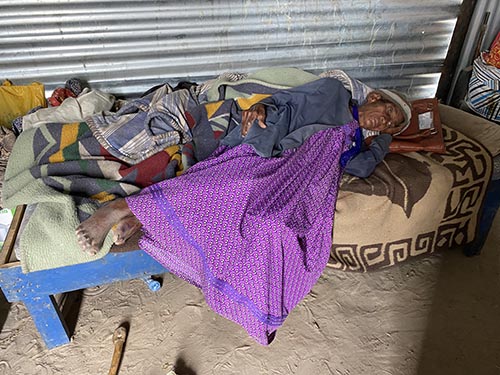 OKANGHUDI - A 93-year-old resident of Okanghudi kaMokaxwa in the Ohangwena region, who was diagnosed with malnutrition, said she wants her bank card back from her neighbour who receives her pension grant on her behalf.

Ndasuunye Natalia Mwahafa said a family member took her ATM card and handed it over to a neighbour to save some of her pension money but this only subjected her to abject poverty and she is now suffering from malnutrition.

Mwahafa’s hospital health passport, seen by this reporter, shows that she was weighing a mere 31.4kg when she was taken to the hospital recently by one of her grandchildren. Doctors indicated that she was underweight and lacks nutrients in her body.

“I don’t have food right now, I am hungry. Some days I have nothing to eat. Look at me, I don’t have shoes. Look at my house. Do I look like someone who receives a social grant?” she asked.

She added that she is surrounded by 12 grandchildren and great grandchildren who depend on her social grant. “Who will feed them if I don’t feed them? Should we really starve because someone wants my money saved? I want my bank card back home. I don’t even know who has it now because they keep passing it on without telling me. Yet I have grandchildren at home who could take care of me better,” she said.

One of the grandchildren narrated to this publication that they don’t want their grandmother’s pension, at least she must buy her enough food that can last a month.

“It is embarrassing for a pensioner to be diagnosed with malnutrition, while she receives money from government. She should start using her money on her while she is alive,” she explained.

She further indicated whenever food runs out before month-end, the neighbour, who collects and keeps the money, refuses to buy additional food, yet she only buys a 50kg of maize meal, a pack of dry kapenta fish and a 750ml of cooking oil.

“She tells us to wait for month-end but our grandmother is starving,” said the grandchild.

Priscila Lukas, who receives the pensioner’s money, said she always provides receipts after shopping and gives the change to grandchildren or to Mwahafa herself.

Lukas explained that she got that responsibility from Mwahafa’s nephew who is based in Windhoek.

Mwahafa’s nephew, Malakia Kashume, confirmed that he gave Lukas the responsibility to take care of her aunt, as the grandchildren in the house don’t cooperate.

“They don’t cook for the old woman that is why she always goes to cuca shops to look for tombo. Some of my cousins take maize meal from home to cuca shops to exchange it for a glass of tombo,” he claimed.

However, Kashume said he arranged with Mwahafa’s biological daughter to collect her from Okanghudi kaMokaxwa and stay with her at Endola village.