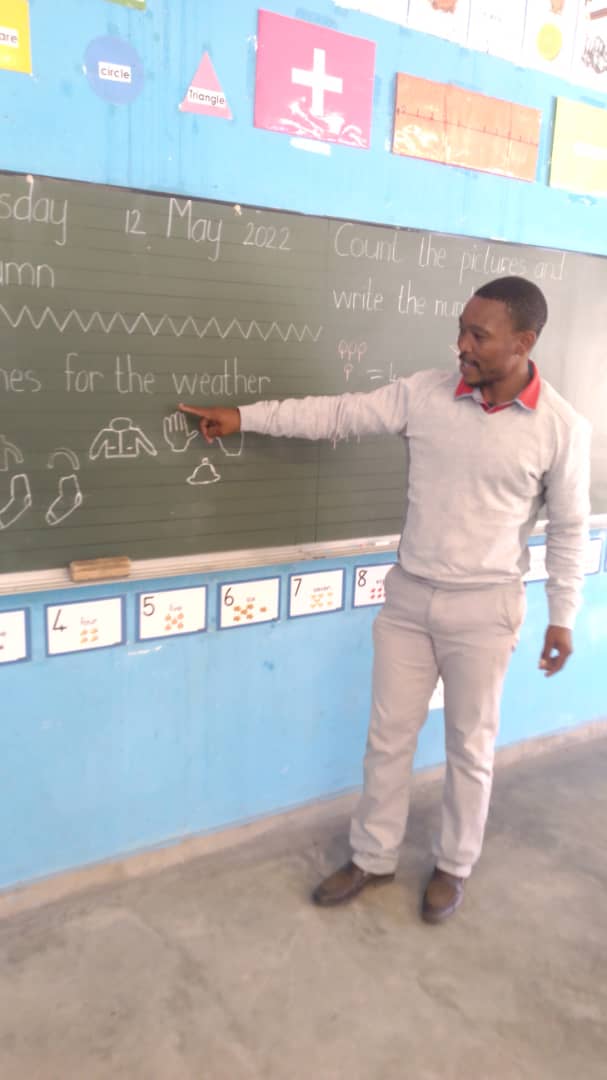 TSUMKWE – A Hai//’om San teacher, who has a desire to see more San people educated, has been voluntarily transporting children to school to prevent them from dropping out and ensure they reach tertiary education.

Born in Tsintsabis, near Tsumeb, Festus Soroab moved to Tsumkwe when he was two years old to live with his grandmother, Lucia Soroas. He started school at Tsumkwe Combined School in 1993.

The 37-year-old teacher described the road to education as bitter and bumpy for most San learners.

“It was difficult for me but I never gave up. I had no one to support me, but the little my grandmother got, she always helped me. In 2002 I wanted to join NDF while I was in grade 10 but my grandmother stopped me. My application was already successful, but my grandmother encouraged me to go to school. I had to do part-time jobs during the holidays to get money to take care of myself. I struggled a lot during my time in Rundu, and I applied to join the force. Again my application was
successful.

Again I called my grandmother – just to let her know I am joining the force – and she refused again. Despite the suffering, I give up and decided to follow my grandmother’s words. My heart was full to complete my senior secondary education. I worked hard despite the suffering and completed my senior secondary education in 2004.”

Soroab was then appointed as a community mobiliser of the Nyae Nyae village schools by the San Education Project, which was supported by Norwegians.

The project did not go as planned, and he was appointed as an undertrained teacher.

“I was paid by the project a sum of N$200 per month as a teacher. In 2007, the project helped me to register at the Windhoek College of Education for a Basic Education Teacher’s Diploma. I took the opportunity with both hands and completed the four years course in 2011 and graduated on 12 April 2012,” he explained.

“It was difficult. There was no proper accommodation. I was sleeping in a small tent. The zip of the tent was getting damaged because of everyday opening and closing; the rats were destroying the floor of the tents, with snakes entering the tent.

“I was not permanently deployed at one school but I was rotated among the six village schools to help out my colleagues and also to go where my colleagues refused to go work due to distance from Tsumkwe. Transport was always a problem, but I took it simply because I am always happy to help the San kids to get educated,” he said.

In 2016, he decided to go out from Nyae Nyae village schools to go get other challenges and work with other colleagues and get other experience.

“I applied to Aasvoelnes Primary School, and I was the successful candidate. I started working at that school that had few learners; I then decided to try and talk to kids and parents in Nyae Nyae villages about the dropout kids of grades four to seven to take them to Aasvoelnes,” he recalled.

When he started mobilising for the school dropouts to get back to school, most parents supported him.

He further moved on to seek more help and later got food assistance from Tucson through Bruce Patcher.

“I was happy and I decided to then buy a minibus just to help the kids with transportation from their respective villages to Aasvoelnes and back to their respective villages during home weekends and holidays. I started with kids from Nhoma village and //xa/oba. They were 25 in total. I was using my own money to fuel my minibus just to help the kids go to school and not be in the streets,” he explained.

However, in 2019 his bus broke down, and the children had no transport. They dropped out again.

“In 2020, I needed a transfer to Tsumkwe or one of the closest villages. It all went wrong when my daughter was diagnosed with epilepsy. I was told by the doctor to be close to a health centre. I had no choice but to register her at Tsumkwe Primary school, and I wanted to be close to her when she started. It was difficult – even though there were vacant positions at Tsumkwe Primary school, I wasn’t shortlisted,” he said.

Although there were ups and downs in making sure San learners went back to school, he did not give up his quest to get more learners to school.

He then stumbled upon a project to help village schools, an opportunity he did not hesitate to grab.

His role now is to mobilise San learners to complete school without dropping out through the Ju/hoansi development fund project.

The Ju/hoansi development fund project was established in 2017 with an intervention for five Village schools (grades 1-4), where the Ju/’hoansi start their school career.

The project will be combining the construction of improved physical infrastructure and supply of up-to-date education equipment and materials with ongoing support in the form of training of educators, transport to schools, management and the provision of supplies, including food.

In addition, special focus will be placed on the engagement of parents and the wider community.

“Although most of them drop out due to lack of transport – with this project, I will make sure I keep them in school by mobilising the parents to release the children,” he said. -ljason@nepc.com.na