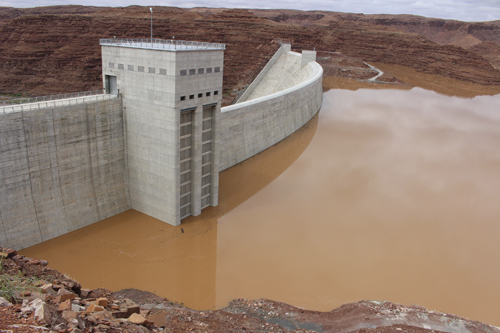 Witbooi died in 1905 and is regarded as one the country’s national heroes and also features on the Namibia dollar banknotes. Known by his people as “!Nanseb Gaib Gabemab” (the snake in the grass), Witbooi rallied his Nama people to rise in a guerrilla war against German imperialism. Speaking to New Era yesterday, Seibeb said the renaming of the dam after Witbooi should be seen in the context of decolonisation.

“Much of post-colonial Africa has embraced decolonisation to rename important sites, and landmarks to local names, which were wiped away by the invading colonial forces,” he said. He said Witbooi is a uniting force and was a central military figure in colonial Namibia, who resisted German’s colonial enterprise. According to Seibeb, Witbooi is also regarded as one of the most skilful and greatest military strategist and tactician in Africa.  “Apart from the above, a monument must be erected at the entrance of Snyfontein settlement, commensurate with tourists’ information centre and cultural site,” Seibeb said. “This is critical if we have to restore our people’s dignity. The colonial name Neckartal Dam can’t be used post-2021.

Let us change the name and localise it. After all, we talk of national reconciliation and peaceful coexistence.” The outspoken LPM leader says it should be recalled that much of the period between 1730 and 1870 was a time of rapid period of people of various tribes in southern and central Namibia.

“Much of the geographical space in southern and central Namibia was inhabited by forages, hunters and herders, and was traversed by extensive pre-colonial trade networks,” he said.

During such periods, Seibeb said, one of the Nama clans, the /Hai-/Khaua community, according to first written missionary accounts, settled in for the very first time on this specific area as early as 1830, which is known as the entrance gate to the founding of the /Hai-/Khaua land. In 1896 and 1897, he said Theodor Rehbock, who was born in Amsterdam in 1864, at the invitation of the colonial Syndicate of Water Affairs, conducted an expedition through Namibia and South Africa. During this time, Seibeb said Rehbock became a visionary of a country transformed by more permanent water supplies in farm dams and massive dams in riverbeds as narrated by Manni Goldbeck and photojournalist Dirk Heinrich in May last year. “He was asked formally to search for suitable areas to construct dams for colonial enterprise and white commercial farmers,” he said. Thus, he said, Rehbock surveyed the current area where Neckartal is situated hence the project derived its name from Neckartal and Kokerboomfontein; two farms just outside Keetmanshoop and the Berseba reserve. He said before the proposed dam was christened as Neckartal Dam, local /Hai-/Khaua had names for the river in local KhoeKhoegowab language, which were !Gupubeb and !Kharo but the ministry opted for Neckartal Dam.
ktjitemisa@nepc.com.na