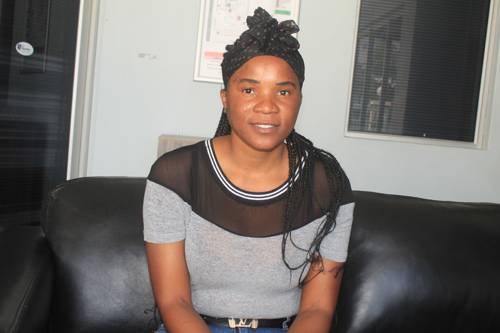 A 28-year-old woman, who has been determined to complete grade 12 and enrol for tertiary studies, is living testimony of the saying one is never too old to learn.

Despite starting school at an advanced age, going to school on an empty stomach, and other distressing conditions at home and school, Hendrina Haipinge has proven that nothing will stand in her way of finding success.
Haipinge rallied against her circumstances and passed grade 12 with flying colours, a striking feat for a learner who learned to embrace her struggles at a young age.

She learned to read and write through literacy education before she was sent to formal school at a later stage.
“I used to go to literacy school with my grandmother because I did not have any documents. I was only sent to formal school when I acquired a birth certificate. At that time, I was already 11 years old,” explained Haipinge, adding that she was anxious about going to school with children half her age.

However, that did not prove to be a hindrance to her.

Haipinge’s parents passed on while she was in primary school, while she also lost her grandmother, which forced her to be self-reliant at a tender age.

“After my grandmother died, I have been living on my own and I was only surviving on the N$200 monthly grant from the government,” narrated Haipinge while adding the situation at home affected her school.
After failing and repeating several grades at Omungwelume Secondary School in the Ohangwena region, Haipinge matriculated with 15 points in 2013.

“It was not easy, it took me four extra years to complete high school, so finishing grade 12 was really a big achievement,” she said confidently.
Since she did not have funds to improve her subjects, she got a job as a shopkeeper in Otjiwarongo.

“I was getting paid N$2 000, so I saved up enough money and later applied to study carpentry and joinery at Namibian Institute of Mining and Technology, due to the lack of finance, I could not complete my course, so I only finished level 1 and left for the north,” she said.
Although her basic needs and responsibilities set her education back, her thirst for knowledge and passion for what is right always drove her further.

Granting that her last formal education was more than five years ago, she went back to school to improve her grade 12 results at Elites Tutorial College in Omafo, Ohangwena region last year, where she obtained 28 points.

“My barriers now drive my passion. If age has taught me anything, is that you are never too old to go back to school,” she said.
She pointed out incidents that happened while at NIMT that pushed her to go back to school and improve her grade 12 results.
“Sometimes I would only drink water and go to classes. At times I will do domestic work around campus in exchange for food. I was desperate to an extent that I will literally beg for food or money to survive,” said the resilient Haipinge.

Despite the struggles she endured through her school life, she is overwhelmed by the support she got from her cousin who funded her school.
“I could not have passed grade 12 without her support. I am truly grateful,” she said.
Her emotional cousin Veronica Haulenga could not hold back tears when New Era called for comment.

“Looking back at what she has gone through, she is a strong person and I saw so much potential in her that is why I decided to fund her school with the little I had,” she said.

Haipinge who has set her sights on studying nursing at the University of Namibia is seeking financial help to further her studies.
She said she also tried applying for the Namibia Students Financial Assistance Fund (NSFAF) and is still waiting for a response.
“I need financial assistance to pursue my career and liberate my country from illnesses,” she requested.
ashikololo@nepc.com.na