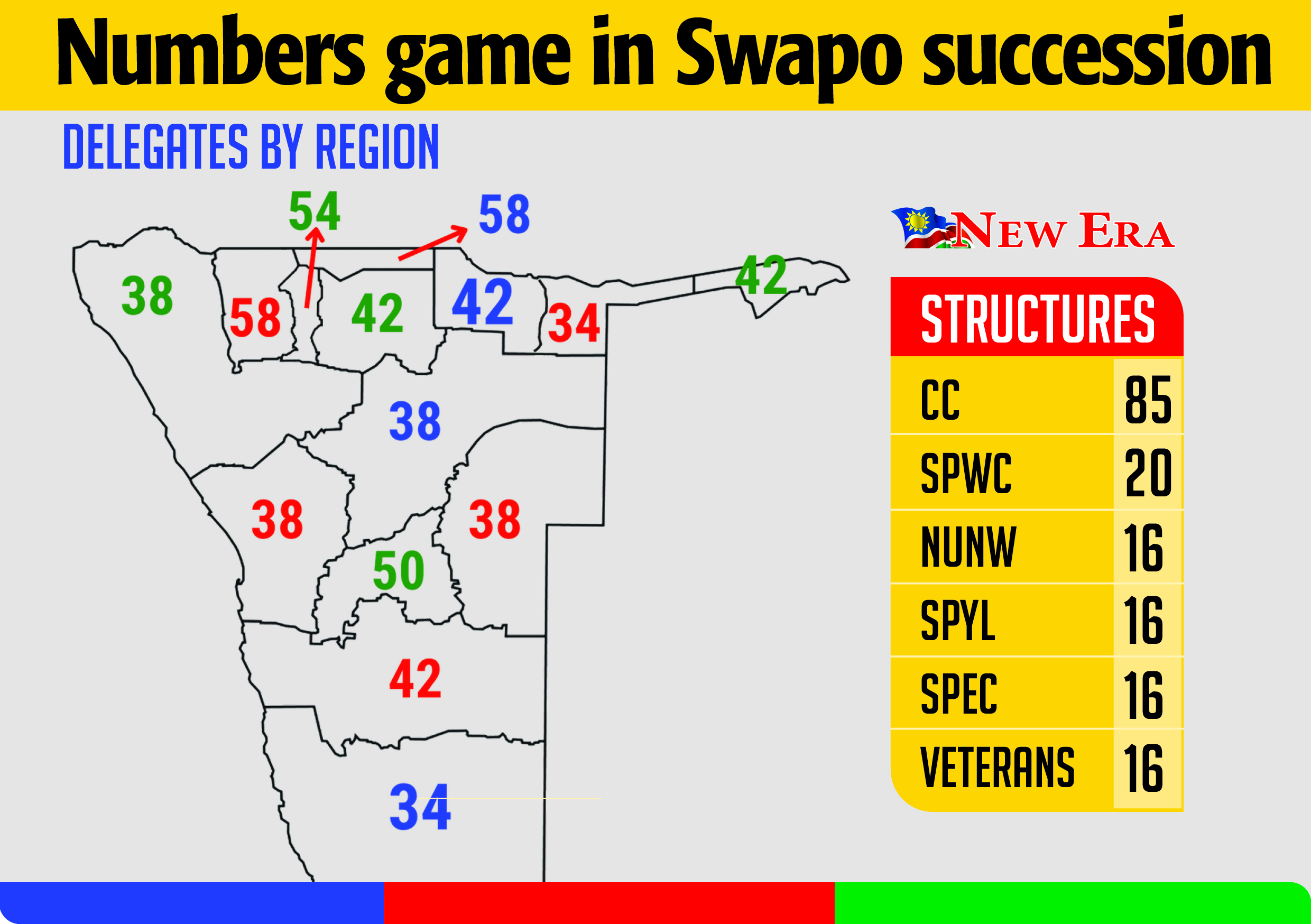 It will all be a numbers game when a little under 800 delegates convene in Windhoek to elect a new Swapo leadership towards the end of November this year.

The stakes are high as 777 delegates ready themselves for the seventh elective congress of the ruling party, with a sharp focus on who will emerge as vice president and automatically Swapo’s candidate for the 2024 presidential elections.

Swapo stalwart Jerry Ekandjo yesterday agreed to escalate his attempt to compel the party to recognise his VP candidature to the central committee.

The erstwhile Cabinet minister failed to make the cut at the recent central committee meeting that elected candidates for the congress, slated for November.

He, however, said some candidates did not qualify to be nominated, having not served in the party’s top structures even for a “single day”.

That is why delegates to the Swapo elective congress are a matter of national importance.

Gloves have already been removed in the contest for the position of secretary general (SG), where incumbent Sophia Shaningwa takes on the go-getting Oshikoto coordinator Armas Amukwiyu.

The position of deputy secretary general (DSG) will also be fiercely contested.

It has pitted former Cabinet minister Uahekua Herunga, Kavango West Swapo coordinator David Hamutenya as well as parliamentarians Lucia Witbooi and Evelyn Nawases-Tayele against each other.

The candidates are expected to address delegates, side-by-side, why they believe they are best suited for the roles they are eying.

The delegates are drawn from all corners of the land.

Each of the 121 constituencies is represented by four people. In Swapo’s diction, this is called a ‘district’.

The 14 regions will each dispatch a contingent of 10 representatives to congress. Both numbers make up a region’s total.

En route to congress, pre-conceptions about the candidates are generally confirmed.

One of the most densely populated regions, Omusati, leads the regional pack with 58 delegates. That region has 12 districts.

Although popular at a national level through various senior government portfolios she has occupied over the years, Kuugongelwa-Amadhila will expect Omusati, where she hails from, to back her.

Shaningwa, who is expected to use everything in her arsenal to retain the position is also from Omusati.

Shaningwa and Nandi-Ndaitwah form part of a Swapo faction that believes the status quo must be maintained at all costs.

Both Nandi-Ndaitwah and Shifeta are from Ohangwena and will count on their popularity to secure maximum numbers.

Slightly below them is Oshana, with 54 delegates. Nandi-Ndaitwah was born in Onamutai in Oshana.

This region, New Era understands, is up for the taking for the three candidates.

“We expect delegates to choose according to their preferences,” former regional coordinator Samuel Nelongo said.

In Oshikoto, fresh-faced 46-year-old Amukwiyu has made it his political fiefdom.

He is just coming from fresh re-election as its coordinator.

The ambitious businessman-cum-politician is baying for the SG post. He will expect the 54 Oshikoto and delegates to rally behind him and his running mates.

Although not publicly stated, Amukwiyu is reportedly in the same camp as Kuugongelwa-Amadhila and Shifeta. The three are said to have Geingob’s backing.

Geingob has refused to endorse any candidate publicly.

The political capital of Namibia, Khomas, will deploy 50 delegates. Jostling and horse-trading in this region have gone into overdrive.

It remains unclear which candidate the region is supporting. According to party insiders, however, influential party figures are reported to be rallying numbers behind Nandi-Ndaitwah’s camp.

Should he win his legal war, Ekandjo’s popularity in Khomas cannot be underestimated.

Far in northeastern Namibia is Kavango West and Zambezi regions, which will each send 42 envoys.

Down south in Hardap and //Kharas will send 42 and 34 delegates, respectively.

The Kunene region is becoming a political battleground for Swapo – internally and externally.

It is not expected to be any different at the congress. Talk is rife, however. The regional leadership, spearheaded by Julius Kaujova and Herunga, are canvasing weight behind Nandi-Ndaitwah. The region has 38 delegates.

Omaheke appears to be neutral in the run-up to congress. However, influential politicians from the region include national planning director Obeth Kandjoze, who is considered one of Geingob’s blue-eyed boys.

If anything, he will use his popularity to influence delegates’ support behind whomever Geingob is supporting behind closed doors.

Omaheke will send 38 delegates. The same goes for Erongo and Otjozondjupa.

With 34, Kavango East will send the least delegates to the much-talked-about congress.

Swapo’s leader, Geingob, will be leading the 85-member central committee. It is the party’s highest decision-making body between congresses.

Bodies affiliated to the ruling party as well as its wings will also be represented.

Analysts this week opined that whoever emerges victorious in November will be in pole position to take over the instruments of power from Geingob when he steps down on 21 March 2025.

According to him, the importance of Swapo’s intraparty elections cannot be overemphasised.

“It is, therefore, important that we pay attention and even try to influence public opinion – and hopefully the opinion of the delegates because whoever emerges victorious there will be in charge of the state,” Tjirera asserted.

Diametrically opposed Tjirera was another political scientist, Rui Tyitende, who said victory is no longer guaranteed for Swapo.

“Fifteen years ago, Swapo could win any election even if they fielded a donkey. Today, that has significantly changed if the national elections of 2019 and regional and local authority elections are anything to go by,” he said.

“Without a clear path of how they are going to enact tangible policies to rescue Namibia from an unremitting unemployment, structural poverty and a general sense of nihilism amongst the populace, their chances of winning outright will not be a jolly ride.”

The question was also thrown to Tyitende, who retorted: “Swapo currently faces fierce opposition as a consequence of economic mismanagement and not necessarily a strong opposition with competent programmes or policies.”