Home / ‘A giant has fallen’

‘A giant has fallen’ 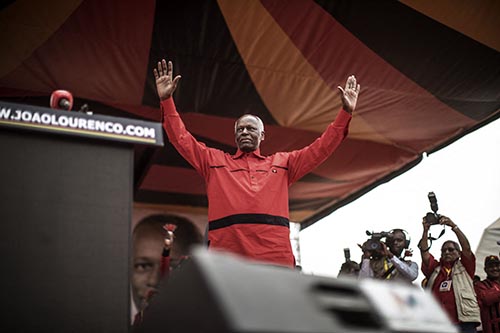 President Hage Geingob has eulogised late Angolan stateman Jose Eduardo dos Santos as an “outstanding revolutionary” who dedicated his life to the pursuit of freedom, justice and equality.

Dos Santos, who ruled Angola for 38 years, died on Friday at a hospital in Barcelona after suffering cardiac arrest. He was 79.

His death has divided public opinion not only in Angola, but also locally. But for many Namibians, Dos Santos remains a hero who not only ended a brutal civil war in 2002, but played a leading role towards Namibian and South African political freedoms.

“Today is a dark day for the African continent. Another giant tree has fallen. Angola has lost an exceptional political icon, and Africa a hero and an admirable statesman. This is a tragic loss for Angola, Namibia and Africa as a whole,” Geingob stated.

He said Dos Santos will be remembered for his immense contribution to the liberation of Namibia.

For many years, Angola was home to Swapo cadres and countless Namibians, who went abroad to take up the fight against apartheid colonialism.

He said Angola, together with other Frontline States, provided all-round political, material and diplomatic support to Namibian freedom fighters under the leadership of Swapo.

“Namibia owes a great debt of gratitude to former president Dos Santos and the Angolan people. Indeed, there is no doubt that his legacy will remain immortalised in the hearts and minds of current and successive generations of Namibians to come. At a personal level, Geingob said he will remember Dos Santos as a dear friend
with whom he had a great working relationship.

“I hold dearly the memory of his attendance of my inauguration as President of Namibia in 2015,” he added.

Founding President Sam Nujoma, who visited Dos Santos a year ago in Luanda, said the late Angolan ruler has always had to resolve complex problems back home, ranging from war to pacifying the spirits of citizens, and through economic and political stabilisation.

“Thus, Angola has lost one of its own sons of the soil and a great statesman
who ruled the country for 38 years between 1979 and 2017. Africa has lost a visionary leader, and Namibia has lost a dear friend and brother,” Nujoma said through his foundation.

He added that to this day, Namibians regard Angola as their home away from home. “During our darkest moments in our struggle against apartheid, it was Angola that had given us shelter, sustenance and support. Indeed, Angola provided us with material and moral support, and gave refuge to our people,” he noted.

Long regarded as untouchable, Angolans were shocked when his hand-picked successor, current Angolan President Joāo Lourenço, turned on him, going on an anti-corruption campaign that would land Dos Santos’ son in jail and also see assets linked to his daughter frozen.

“As to whether he was a hero or a villain, that is a determination Angolans themselves must make, and for posterity to determine. What cannot be erased is that Angola, Namibia and South Africa are now politically free. Dos Santos played his role in it, and he has gone,” Ngurare observed. He said he viewed the late Dos Santos from two perspectives.

“This was a difficult, bitter and protracted liberation struggle. Apartheid South Africa with its Western backers did not want Namibia and South Africa to be free. In fact, they wanted Angola to be invaded and occupied,” Ngurare recalled.

“Millions died in the process. Dos Santos in this era stood firm, and did so on the side of Namibia and South Africa. Swapo as a liberation movement, under its then Commander-in-Chief, President Sam Nujoma, also fought from the geographical space of Angola. The same is true for the ANC. We salute Cuba, the former Soviet Union and others for the support provided. This is the history from which Dos Santos cannot be erased. Without him as then president of Angola, the independence of Namibia and South Africa could not have come sooner.”

The second viewpoint, according to Ngurare, is related to Dos Santos and how he used the oil fortune, amongst other things.

He said when he was addressing the congress of the JMPLA in Luanda a few years ago, he asked Namibia and Angola to put into effect a memorandum of understanding that they had signed in order for the two peoples, particularly the youth of the respective nations, to profit from Angolan oil. He said his counterpart, the late Luther Rescova, took that message
to the late Dos Santos, and he supported it.

From that perspective, Ngurare said he thinks Dos Santos understood the call for ensuring that the resources of the continent should benefit all the inhabitants equitably.

Political analyst Ndumba Kamwanyah said many Namibians who lived through the liberation struggle will remember the late Dos Santos in a more favourable way.

“Despite his country being involved in a bitter civil war that saw foreign forces invading that country, he kept the liberation movement Swapo in Angola, an action that had dire consequences for Angola and its people,” he stated.

Another political commentator, Gerson Sindano, said Dos Santos will be remembered as a good human being who assisted Namibia in her fight for independence.

“He oversaw the end of 27 years of the reign of terror in Angola - the protracted civil war ended under his watch,” he added. Economically, Sindano said Dos Santos will be remembered as a man who helped Angola’s economy grow by around 7%, an impressive figure by global standards.  However, he added that when it comes to his political sin, if there is any, history will judge him or absolve him.