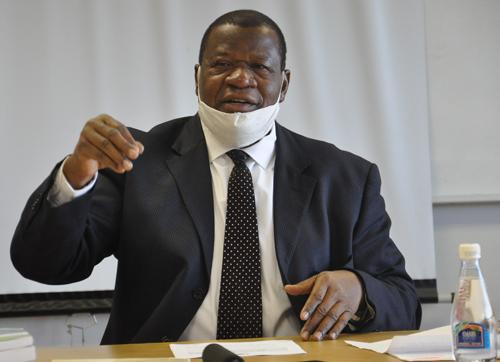 Transport minister John Mutorwa has re-tabled an agreement seeking to ratify the establishment of the Walvis Bay-Ndola-Lubumbashi Development Corridor. In March 2010, the respective ministers of transport of Namibia, Zambia and the Democratic Republic of the Congo (DRC) adopted and signed in Livingstone, Zambia the agreement on the establishment of the Walvis Bay-Ndola-Lubumbashi Development Corridor.  Mutorwa on Tuesday said it appears for specific legitimate and valid reasons and compelling prevailing circumstances the item was never discussed, nor procedurally disposed of by the country’s lawmakers. “That situation is deeply regrettable, I am sure by both the executive through the ministry and legislative organs,” Mutorwa said. “The saying better late than never, I believe, is more applicable and acceptable here, so also, the expression to err, is human but to give is divine.” The Trilateral Road Transport agreement between Namibia, Zambia and the Democratic Republic of Congo (DRC) was in 2016 signed in Zambia’s Livingstone.

The agreement aims to develop a strong and competitive transport industry to ensure all operators compete successfully for a fair share of the transport market between the territories of the member states. The signing of the agreement was also aimed at ensuring improved and a more efficient regulation of the operation and maintenance of transport and databases, permit issuing processes between member states and control procedures.  The Walvis Bay Corridor Group established an office in Zambia in 2005 and DRC in 2012 to develop business along that corridor. The initiation of this contract was derived from an existing Bilateral Road Transport Agreement between Namibia and Zambia, which created harmonisation of all road related matters. At the meeting where the agreement was signed, the technical and permanent secretary committees of the WBNLDC reviewed, deliberated and agreed to establish a permanent secretariat of the WBNLDC by December 2017.

Other key related issues discussed were matters related to customs, transit fees, security, theft and smuggling along the corridor, immigration and health-related issues.  The agreement will further facilitate and regulate the movement of passengers and goods, whilst promoting their free flow between these countries. In addition, the creation of new state and private sector business development is ensured, making the Trilateral Road Transport Agreement a very lucrative transaction.