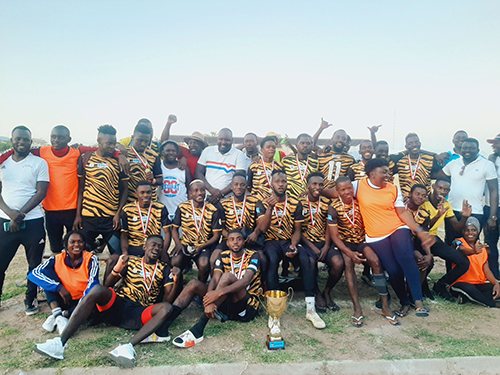 A great number of teams from the various northern regions battled it out for top honours.

In the youth football category, Eshoke Chula Chula FC reigned supreme on the day as they defeated Tsandi Village Council by 2-0 in the final.

Ndakelwa Wakupulile and Moses Shivolo were on target for Eshoke Chula Chula. The win saw them walk away with a trophy, 18 gold medals and a cash prize of N$15 000.

Tsandi Village Council received 18 silver medals and N$10 000.  Third and fourth-placed Chipolopolo and Brigade pocketed N$3 000 each as consolation. In the veteran’s category, Tsandi veterans took home the trophy, 18 gold medals and N$6 000 after they defeated Ondangwa Masters by 5-4 on penalties.

Ondangwa Masters walked away with 16 silver medals and N$4 000, while third-placed Oshana Nampol and fourth-placed Northern Coaches both took home N$2 000 each.

Speaking to New Era Sport during the tournament, Oshakati mayor Leonard Hango said he was happy with the overall success of the tournament and with how teams conducted themselves on and off the pitch.

Hango pointed out there has not been a tournament in the north that has attracted a large number of teams for a single tournament as witnessed at the weekend.

“This tournament has brought a lot of joy – not only to the teams that took part but also the residents of Oshakati and surrounding villages, especially in terms of selling kapana and drinks,” he added.

Hango said he was also impressed by the tight security throughout the event – that is why people freely enjoyed the tournament and came in such a large number to the stadium, he said.

“I hope next year we will have a lot of sponsors coming on board so that this tournament can be bigger and better.”