Home / Fighting the stigma of albinism

Fighting the stigma of albinism 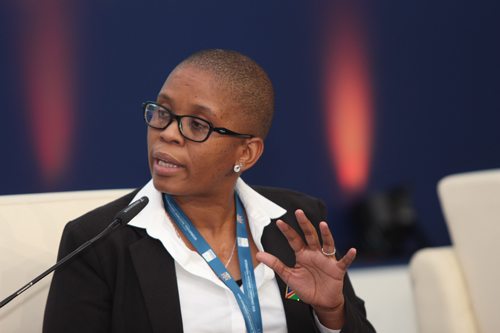 Justice minister Yvonne Dausab has expressed concern over the slow progress in global efforts to promote and protect human rights of persons with disabilities and that of persons with albinism.

Dausab raised this concern yesterday while addressing delegates during the virtual high-level segment of the 46th Session of the Human Rights Council that started on Monday and ended yesterday.

She said the provisions of the Convention on the Rights of Persons with Disabilities (CRPD) demand full inclusion in policies, laws and infrastructure, ensuring unlimited access to public services and support in the independent living of persons with disabilities.

“We cannot ensure the promotion and protection of human rights of persons with disabilities if we continue to exclude them from political decision-making positions at national level,” she said.

“Let us all work with international organisations, organisations of persons with disabilities and civil society organisations to mainstream disability issues and achieve full inclusivity,” she told delegates virtually.
Furthermore, Dausab also raised distresses over the alarming rate of violence against women and girls, saying it remains a challenge for Namibia.

In recent years, she said Namibia recorded high numbers of violence against women and girls in cases of domestic violence, intimate partner killings, as well as rape and other forms of sexual violence.
“We joined the world in commemorating the 16 days of Activism against Gender-based violence – and as leaders, we listened to the activism and calls for change from protesters across the world who drew attention to the prevalence of gender-based violence as an issue of global concern,” she said.

To combat this, Dausab said Namibia has since begun the process of amending both the Combating against Domestic Violence and the Combating against Rape legislation but also acknowledge that societal reform is necessary to denounce and eliminate harmful patriarchal and cultural practices that diminish the rights of women and girls.

“We welcome cooperative engagements on effective interventions and good practices from member states and international organisations to address the alarming scourge of violence against women and girls,” she said. Dausab further reiterated Namibia’s stance on Western Sahara, saying Namibia will continue supporting UN solutions in resolving the plight of the people of the disputed territory on the northwest coast and in the Maghreb region of North and West Africa.

Also, she said, Namibia stands firm with the People of Palestine in their just cause.
She also called for the international community to respect the principle of state sovereignty and offer necessary assistance to states that are trying to resolve their disputes through peaceful means.

“Universal coercive measures serve as additional constraints to countries that have limited-to-no resources, especially during these challenging times of a global pandemic, sanctions aggravate pre-existing adversities that impact on human rights,” she said.
- ktjitemisa@nepc.com.na