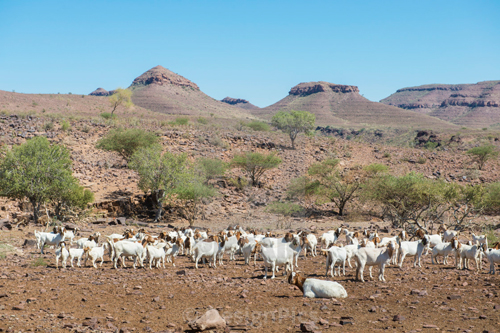 After a long-running drought slashed their livestock, small-scale farmers in the //Kharas, Hardap, Kunene, and Omaheke regions will soon receive quality core breeding goats from government to help improve their social and economic wellbeing as well as increase food security.

This was announced by agriculture minister Calle Schlettwein in parliament last week while responding to parliamentarian Apius Auchab who wanted to know what government is doing to help farmers after the prolonged drought.

Schlettwein said as an ongoing intervention to support vulnerable households with quality core breeding stock, the ministry is implementing the small stock distribution and development programme in communal areas.

“This revolving project is aimed at providing quality core breeding flock of suitable local goats to selected vulnerable households to gain a sustainable means of income and increased food security,” the agricultural minister explained to lawmakers.

He said during this financial year, the programme will benefit small-scale farmers in the //Kharas, Hardap, Kunene, and Omaheke regions and also the former SWATF members camping at the Katutura Hall in Windhoek to be relocated to their respective regions.

He told lawmakers that the process of selecting potential beneficiaries and distribution of goats is at its final stage.

According to Schlettwein, the government has to date a total of 180 beneficiaries who have benefited from the project and a total of 3 780 goats were distributed in the Kavango West, Kavango East, Zambezi, Otjozondjupa, Erongo, Ohangwena, Khomas, Oshana and the Kunene regions.

Furthermore, Schlettwein informed the house that another intervention to help farmers is the IREMA Kunene Project Small Stock Resolving Scheme, which he said is aimed at improving the livelihood of the rural communities and to contribute to food nutrition security in that region.

“The scheme is complementing the Small Stock Development and Distribution of Communal Areas (SSDDCAs).”

“This scheme is also aimed at providing core breeding flock of suitable goats to selected vulnerable households to gain a sustainable means of income generation and enhanced food and nutrition security while improving their social and economic wellbeing,” the land reform minister told lawmakers.