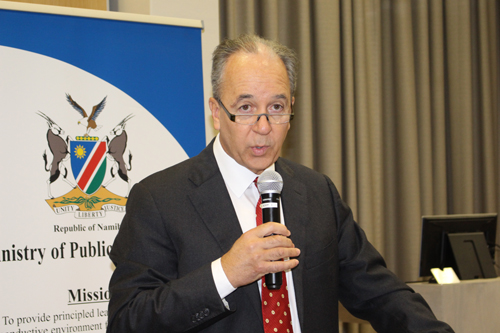 Public enterprises minister Leon Jooste says his ministry is at an advanced stage of developing an integrated electronic performance monitoring and evaluation system to track and evaluate the work of state-owned enterprises.

The monitoring and evaluation system, Jooste said, will allow the ministry to identify potential problems before they escalate and then to conceptualise suitable remedial action to address issues with minimal damage. Jooste made the remark while responding to questions posed by Rally for Democracy and Progress (RDP) parliamentarian Mike Kavekotora in the National Assembly on Thursday last week.

Kavekotora had asked Jooste as to what lessons government has learnt from Air Namibia’s liquidation and whether government will still allow technically insolvent SOEs to continue operating even if auditors are expressing “going concern” issues. Furthermore, Jooste said government aims to restore the commercial viability of distressed public enterprises.

According to Jooste one of the important lessons is the importance of intervening as soon as the commercial viability of a parastatal is threatened. Turning to Air Namibia, Jooste last week also informed lawmakers that a proposal by Turkish company, Onurair, would not have saved Air Namibia.

“We did not ignore the advice from the ambassador on an offer from Onurair. The offer consisted of relocating six of their own aircraft to Namibia and registering a Namibian company,” Jooste said.

“In fact, the offer was to start an international African airline based in Namibia with their own aircraft and did not contain any offer to invest in Air Namibia. This offer would therefore not have addressed any of the Air Namibia challenges experienced at the time.”

Information minister Peya Mushelenga last week announced government had approached other airlines such as the South African Airways (SAA), Ethiopian Airline, TAAG, Lufthansa, KLM, British Airways, Emirates and Qatar Airways, among others. However, this did not yield positive results.

Jooste also said government continued pumping money into the national airline because of its massive strategic significance at the time. “Over the years the global airline industry went through significant changes in line with “open skies” policies, first under the Yamoussoukro declaration and later through the Single Africa Air Transport Market under the African Union,” Jooste said.

“That is why we experienced an unprecedented number of global airlines entering the Namibian market and offering alternative options to travellers.”

He said the liberalisation of the global airline sector has deteriorated the strategic significance of Air Namibia in its current form as it was no longer the primary enabler for tourism growth. -ktjitemisa@nepc.com.na