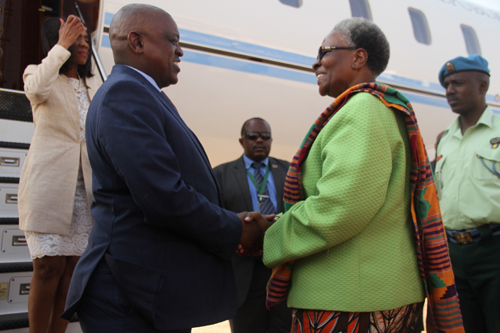 Just a little over 25 days after visiting Namibia for a one-day working visit, Botswana president Mokgweetsi Masisi is once again expected to arrive in Windhoek this morning.

During the 29 January visit, Masisi, who was hosted by President Hage Geingob, deliberated on the joint investigation into the fatal shooting of three Namibian brothers and their Zambian cousin by the Botswana Defence Force (BDF) in November last year along the Chobe River.
Press secretary Alfredo Hengari said Masisi’s visit will include discussions with Geingob around issues of water infrastructure and sustainable development after the two leaders took the decision to elevate the Joint Permanent Commission of Cooperation to a Bi-National Commission.

“The two heads of state will also exchange views on post-Covid-19 economic recovery and access to Covid-19 vaccines, including regional and international issues,” Hengari said yesterday.

“As members of the Southern African Customs Union (SACU), Namibia and Botswana cooperate in the fields of trade; health; defence and security; agriculture, education and transport.”

During his last visit last month, Masisi said the much-awaited joint investigation report into the shooting incident of three Namibians and a Zambian national by the BDF was not yet for public consumption.
At the time, Masisi said there is still a judicial process that still needs to be completed in Botswana before the report is released to the public.

“As is the case in Botswana and the incident took place in Botswana, there is a judicial process. Unfortunately, for the time being, the matter is sub judice,” he was quoted as saying.

“There is a process that still needs to be completed in Botswana. I would advise strongly not for the report to be made public until so authorised by a competent court. The content of the report established all the facts. Let us not go ahead of the truth until the competent court authorises it.”
The investigation into the shooting was completed last year and a report was submitted to the two heads of state for assessment.
Both Masisi and Geingob have supported efforts for a speedy investigation into the unfortunate incident, which last year triggered unprecedented protests in the country.

The three brothers – Tommy (48), Martin (40) and Wamunyima Nchindo (36) – and their cousin Sinvula Muyeme (44) were shot by the BDF on 5 November along the Chobe River.
At the time, the BDF claimed they were poachers. The brothers’ mother Alphonsina Nkungano Mubu (69) also died suddenly from a suspected heart attack days after their killing.

The family and witnesses insisted the four were not poachers. Since the killing, Namibians have held protest marches to denounce Botswana’s controversial so-called ‘shoot-to-kill’ policy, which, according to reports, has claimed 37 Namibian lives since independence.
On Friday, Masisi rejected assertions his country was having a ‘shoot-to-kill’ policy.

“We do not have a policy to shoot and kill, or a programme, project or whatever you call it.
“As often, something happens a number of times and repeats itself – a label is put to it. People begin to use language, and that is what seems to have happened in Botswana with this so-called ‘shoot-to-kill’ policy. Every nation has rules of engagement in its territorial space. And we are no different in Botswana.

“But we are not a threat to people or institutions going killing willy-nilly. We are not trigger happy, even the Botswana police or BDF, we follow due processes and respect life.”
- ktjitemisa@nepc.com.na