Home / Out of my jurisdiction - Dyakugha

Out of my jurisdiction - Dyakugha 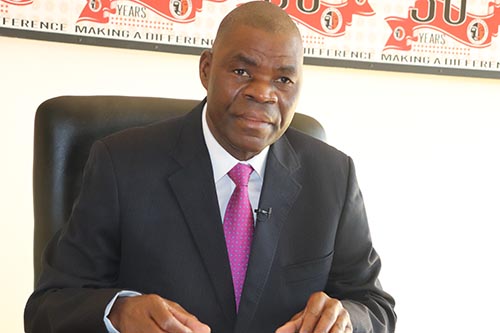 What has now been dubbed Farmgate threatens to embroil both presidents in an alleged cover-up after the theft by Namibians of almost US$4 million (over N$60 million) from his South African counterpart Cyril Ramaphosa’s Limpopo farm. “The mandate of the ombudsman in terms of the Namibian constitution and the enabling legislation is generally based on three mandates; to investigate violations of human rights, maladministration, and protection of the environment in the country,” Dyakugha said while addressing the media in the presence of NEFF leadership yesterday.

NEFF deputy president Kalimbo Iipumbu last week wrote to Dyakugha requesting him to investigate the role played by Geingob in an alleged cover up that arose from the theft.

“It is important to note that I have a distinct and limited jurisdiction, which means I have no inherent jurisdiction, and I cannot act beyond my statutory powers,” Dyakugha said.

He stated that, without necessarily invoking Section 4 (b) of the Ombudsman Act, which NEFF cited, his view is that the complaint filed by NEFF on 8 June 2022, is outside his mandate.

“The words and concepts including the language used in the complaint were in reference to breaking a criminal law. For example, words such as unlawful conduct, money laundering, theft of money, connived with the officials to conceal paper trails of foreign and local subjects to ensure that criminal laws are not complied with,” he explained.

Therefore, he said it is his office’s considered view that such alleged acts by Geingob are tantamount to the violations of the oath of his office.

“The violation of oath of office is one area in which I could not find a clear express provision in our laws, However, Article 29 of the Namibian constitution might possibly provide guidance on the issue,” he said.

Meanwhile, the Presidency said there is absolutely no truth in the allegations that Geingob inappropriately used his office to assist Ramaphosa.

Presidential spokesperson Alfredo Hengari issued a statement over what it calls “unfounded allegations” that President Geingob might have assisted his South African counterpart Ramaphosa in “apprehending” a suspect connected to the Phala Phala farm burglary.

Arthur Fraser, South Africa’s former spy chief alleged that Namibian criminals broke into that farm to steal the money hidden in the furniture. Ramaphosa has admitted to having a close relationship with Geingob, but at a media briefing on Friday would not say if he sought the latter’s help to cover up the robbery that took place in 2020.

Fraser opened a case against Ramaphosa over an alleged high-level cover-up between the two heads of state as Ramaphosa allegedly sought the assistance of Geingob in apprehending the suspect in Namibia.

South African opposition politicians have pounced on the scandal that threatens Ramaphosa’s reign. Last week, the Economic Freedom Fighters (EFF) disrupted proceedings during the debate on the presidency’s budget vote.

The Democratic Alliance’s leader John Steenhuisen said, “Phala Phala is fast becoming your Nkandla,” pointing also to the “blurring of the lines between Mr Ramaphosa the head of state, and Mr Ramaphosa the businessman”.