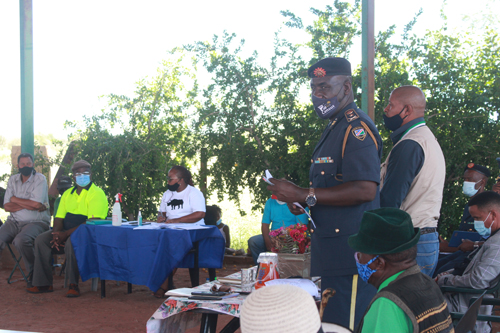 FARM VERSAILLES – Khomas police commander Commissioner Joseph Shikongo has expressed concern over the rate at which residents of Dordabis settlement are withdrawing cases from law enforcement and the courts. Shikongo raised the issue during a meeting with the residents of Versailles, a resettlement farm situated southeast of Rehoboth in the Dordabis area on Saturday.

He warned scores of inhabitants resettled on the farm that the tendency of withdrawing cases could inspire perpetrators to commit similar offences within a short period upon their release from police custody.

“We have over 20 cases withdrawn in the last year in the Dordabis areas and this is a concern. Most of you report cases and later withdraw the cases because the perpetrators are your family members and you feel sorry for them and these are people who come back to commit crimes,” Shikongo said while responding to the residents who had complained that perpetrators of crime in the area are released by the police without proper explanation to them.

He further called on residents to help police when it comes to curbing crime, adding that the police will soon set up a suggestion box at the farm for anyone to tip off police on crime in the area.

Shikongo also urged residents to report crime on time because delays in doing so make it difficult for the police to carry out proper investigations.

“We are here to serve you. But without your assistance, it becomes difficult for us to do our work. A major challenge we experience in this region is that complainants take too long to report a crime. If you report a crime after a long time, it makes it difficult for the investigators to obtain the necessary evidence to pursue the culprits. I, therefore, urge you to report crimes on time,” he said.

Shikongo was accompanied to the meeting by several high-ranking police officers that included station commanders and members of the gender-based violence unit.

The meeting was also attended by Windhoek Rural constituency councillor Petrus Adams and some commercial farmers in the area. About 116 families of Stinkwater community were in 2012 resettled on the 6 938-hectare farm situated in the southeast of Rehoboth in the Khomas region.