Home / 62 Namibians safely out of Ukraine

62 Namibians safely out of Ukraine 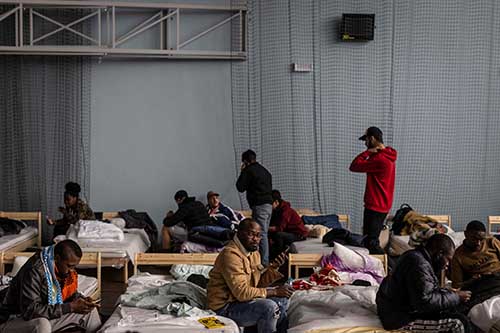 Government yesterday announced that out of 114 Namibians based in Ukraine, 62 have successfully crossed over to places of refuge, including neighbouring Poland and Hungary.

According to international relations minister Netumbo Nandi-Ndaitwah, this gives flexibility for the Namibian government to set in motion the repatriation process after Russia’s special military operation against Ukraine.

Russia last week launched the operation, arguing that it was defending the Donetsk and Lugansk People’s Republics, which broke off from the eastern part of Ukraine shortly after the 2014 coup in Kiev. The tension between Russia and Ukraine has escalated, leading to not only foreign natinals leaving the country, but Ukrainians as well.

There are 114 Namibian nationals living in Ukraine, of whom 92 are students, including 36 who are funded by the Namibia Students Financial Assistance Fund (NSFAF) while 56 are privately funded.

Delivering a ministerial statement in parliament yesterday, Nandi-Ndaitwah said Hungary is hosting two nationals at Namibia’s honorary consul in that country, one in Slovakia,  and five of them are being taken care of by friends of Namibia in Romania.

According to the minister, the rest of the nationals are either working there, are married to Ukrainian nationals or are former students who chose to remain in Ukraine.

“We are appealing to those in contact with Namibian nationals stranded in Ukraine and the users of social media to encourage Namibians to find their way out of Ukraine to safety, as it is currently extremely difficult to help them while there until the situation improves,” she urged. The minister said after consultations with some Namibians, they have realised that some are traumatised or shocked because of the events that unfolded, leading government to come up with ways to assist them before seeing their families. “Arrangements will be made on arrival home to ensure they receive professional services before they are reunited with their families. I cannot tell you when the first person will be arriving, but starting today, we are looking for a place to welcome them. Poland has given foreign nationals 15 days, and we do not want to abuse their hospitality”, she added. Namibia’s ambassador to Russia Clemens Kashuupulwa was hopeful and certain that everything was going well regarding facilitating the process for Namibians to return home. “There is good progress on the evacuation process of Namibian students from Ukraine to Poland and other neighbouring countries with Ukraine. I am expecting the first group to land in Namibia soon,” said Kashuupulwa.

Meanwhile, AFP yesterday reported, citing United Nations figures, that some 677 000 refuges have fled the conflict in Ukraine for safety into neighbouring countries.

Abuja - Nigeria, South Africa and other African governments scrambled this week to help their citizens escape the Russian “special military operation” in Ukraine after reports of the racist and unfair treatment of Africans at border crossings. Africans in Ukraine, many of them students, are among hundreds of thousands of people trying to flee into Poland and other neighbours. According to AFP, African Union leaders voiced concern at the reports of the mistreatment of Africans caught up in the Ukraine conflict, and said such conduct would be “shockingly racist”. The current chair of the African Union, Senegalese President Macky Sall, and African Union Commission head Moussa Faki Mahamat said on Monday that they were “particularly disturbed by reports that African citizens on the Ukrainian side of the border are being refused the right to cross the border to safety”. “Reports that Africans are singled out for unacceptable dissimilar treatment would be shockingly racist and in breach of international law,” they said in a statement.