Home / A chicken in every pot... sky is the limit for budding poultry farmer

A chicken in every pot... sky is the limit for budding poultry farmer 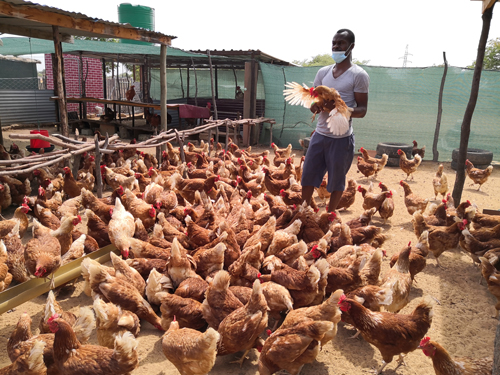 ONGWEDIVA - Armed with nothing but a dream to become a successful poultry farmer, Izata Nganga has expanded his chicken farm from just 20 chickens last year February to about 340 chickens this year.
The 32-year-old Nganga, who is passionate about farming, sells chickens for meat and eggs at his farm situated at Okapa near Ruacana in the Omusati region.

His dream remains to increase the number of chickens at the farm so that he can become self-sustainable.
At the moment, the farm only produces about four packs of the 30-egg trays daily.
But, he said, the farm is not yet able to sustain itself because the money generated at the moment does not make up for the chicken feeds, medicine or the monthly vaccines.

Nganga said despite the current setbacks, he remains inspired to grow his business.
“I am not yet making money from the farm, but I am inspired by those who have made it and shall continue to push,” said Nganga.
He said the feeds cost him at least N$430 and one bag is only enough to feed his chickens twice daily for two days.
Nganga, who believes in fending for himself, said whilst funding is necessary to grow a business, the youth should inculcate a culture of starting something instead of waiting for government handouts.

“Government should find you going already, people are motivated to assist those who are already doing something for themselves,” said Nganga.

He said the business fraternity is full of setbacks but that should not be a motive to deter anyone from working hard.
He narrated the chickens are prone to illnesses and there were times he could not afford medication.

“But I learnt to isolate the sick chicken from the healthy chickens whilst treating them,” said Nganga.
Apart from his dream of being successful, Nganga also want to aid government in the fight against unemployment and poverty and thus want to employ fellow young people from his community.

He pleads to fellow young entrepreneurs and farmers to share skills so that collectively they can strive together.
- nashipala@nepc.com.na