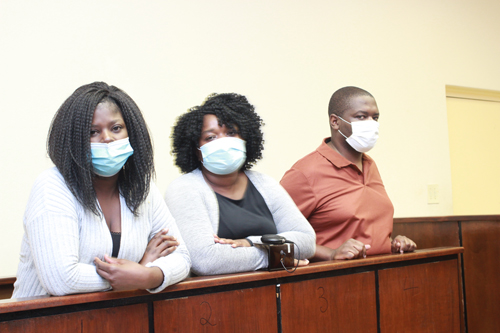 The Windhoek Magistrate’s Court on Friday has denied an application by the defence team of parents who are accused of assaulting their nine-year-old daughter to death last year to have their case provisionally withdrawn, pending the finalisation of police investigations.

Edward Nkata and Rachel Kureva – parents to the late Akundaishe Natalie Chipomho, alongside Edward’s wife Caroline Nkata, were arrested in January 2020, facing charges of murder read with the provisions of the Combating of Domestic Violence Act, defeating or obstructing the course of justice and violating a human body.

The trio appeared in court on Friday from police custody after they were denied bail during their first court appearance.

During their court appearance, their lawyers Mbanga Siyomunji and Milton Engelbrecht made an application to have the case provisionally withdrawn, pending the finalisation of police investigations.

The lawyers argued that there has been an undue delay to finalise investigations into the matter.
Thus, the matter should be withdrawn and the accused can be summoned once the State has “put its house in order”.
The application followed State prosecutor Cedric Mundia’s request for an order to have the matter postponed due to incomplete investigations.

According to Mundia, the State is yet to receive laboratory results. Also, there are additional instructions given by the prosecutor general in January that need to be complied with, he said

Declining the defence application, magistrate Jorina Jagger countered that there is no delay in finalising investigations as there is evidence that the investigating officer has started and has complied with some of the prosecutor general’s instructions.
The court postponed the matter to 30 April, making it a final postponement for police investigations.

It was her testimony that he further forced her to accompany him to buy paraffin and set the body alight.
According to court documents, a post-mortem revealed her death is related to trauma to her head and lower abdomen.
The Nkatas were spotted dragging a wheelie bin in the eastern direction of Ooievaar Street in the Rhino Park area around 21h00 and a witness felt it was suspicious because it was at night.
The couple was caught on surveillance camera in the area.

According to the police, neighbours reported that the children, and specifically Chipomho, had been assaulted on several occasions and that this had been reported to social services since last year.
In an attempt to run from the law, the Nkatas tried to flee the country before they were arrested outside Otjiwarongo. - mamakali@nepc.com.na