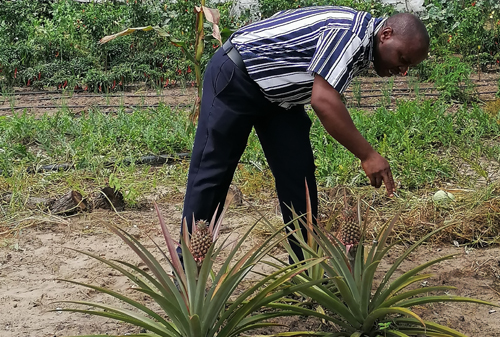 KATIMA MULILO - Owning or starting a business from scratch is not an easy journey for many, as much as others thrive in the industry, some are not as lucky and require assistance.

The Directorate of Agricultural Production Extension and Engineering Services (DAPEES) under the Ministry of Agriculture, Water and Land Reform has implemented Agronomic and livestock subsidy programmes for communal farmers in the 14 regions since last year.

According to Violet Simataa, the ministry’s chief agricultural scientific officer for Zambezi region, the farmers who benefitted from the programme received some items, including subsidised ploughing services as well as livestock from the ministry.

With the aim of improving agricultural production and productivity, this has been realised and farmers in Zambezi regions who benefited from the programme were happy to share their experiences.

One of the farmers, Joseph Simataa takes pride in growing tomatoes, okra, and other vegetables after benefiting from the programme.
He explained that he is practising agroforestry as he already had some animals on his farm before being selected as a beneficiary.
“I received one shade net, a wheelbarrow and two rakes and bought the rest of the items. However, selling the products has not been easy. I mostly depend on the street vendors and those are the people who buy from me. Even though we are aware of Agro Marketing Trade Agency (AMTA), I do not see much of AMTA in the region or hear anything about them marketing or buying our products.

I have a lot of tomatoes right now, and I have to start harvesting, so my target market are the street vendors as the market itself is a challenge,” stated beneficiary Joseph.
Another farmer, Innocent Ntema said he came to know about the programme through an advert from the ministry, which called on individuals to apply.

“I applied and I was one of the people who benefited from this project. I received 21 goats in March last year, 20 consisted of females plus one male. I currently have 42 goats.

The challenges I have experienced is that they are not easy to look after, you cannot compare them to cattle. If you release them early, they will destroy people’s crops as we are surrounded by fields. So, I instructed the workers to only release them late in the afternoon,” Ntema said.
He further stated that diseases also took its toll. However, the ministry initially provided him with medication when he received the goats, and now he is expected to buy them himself.

“The good thing about goats is how fast they multiply, but the challenge now is that I have more males than females,” stated Ntema.
He is adamant that since the programme is aimed at giving back to the community, he would be able to give back earlier than expected.
“The agreement was that I give back 21 goats after five years so that someone else can also benefit. However, I can start giving back after one year, at least five or 10 goats. So that by the time I reach five years, I have already given back.”

Hildah Siamape is another livestock farmer from Impalila Island who shared her bad experience with livestock farming.
“I received 21 goats last year in March, in addition to the goats I already had. The goats arrived in good health and started giving birth, but by December the goats started getting sick and started dying one by one. I am now left stranded and have no idea what to do.
I keep on buying the recommended medication but it is not helping. So far, nine goats have died. Goats are easier to look after but perhaps because of the breed, they are not adapting here,” said Siamape.