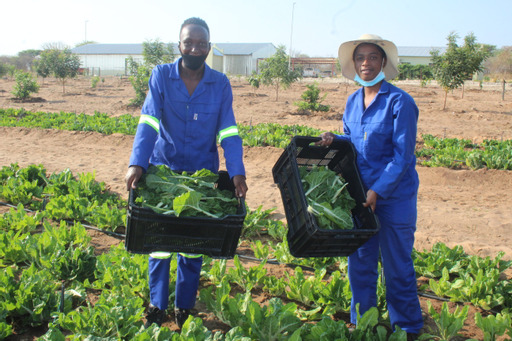 RUNDU - The Rundu Vocational Training Centre (RVTC) says their Agri-TVET programme is progressing well, with 66 trainees being prepared for agriculture jobs and entrepreneurship.

The Agritech programme was established with the aim to inspire young people to consider taking up training in the area of agriculture, which exposes them to best-practices required to establish and maintain food security in the country.

“We are doing well; we have enjoyed several harvests from the centre. Horticulture training is more on crop production, whereby they are trained to plant and harvest crops according to the current weather,” said the RVTC's liaison officer, Milton Mwiya.

In July 2017, they registered their first crop of horticulture trainees into the Agri-TVET programme, and in January 2018, the first group of trainees in farm machinery training were registered.

The only challenge the Agri-TVET campus is facing is that land is not enough for expansion, although the demand is high.

“But the team is ready to produce for the nation. They have been producing some vegetables. They are taught to be self-employed, and not to only think of being employed by the public or private sectors, but to create employment for themselves and others,” Mwiya noted.

“Farm Machinery is more on the operation of farm equipment and infrastructure. It’s a jack of all trades whereby the pulling of pipes and maintaining of agricultural equipment is also involved.

The two trades work together. There is a high demand and interest from the nation to study the two trades. Enquiries have been pouring in for part-time studies,” he added.

Construction of the Agri-TVET Campus at the RVTC was made possible through support from the German government through its Deutsche Gesellschaft für Internationale Zusammenarbeit (GIZ) and the Promotion of Vocational Education and Training (ProVET) project.

This particular project’s support also included the development of new Agri-TVET unit standards and qualifications, the procurement of training equipment and the mentoring of trainers, and translates into an amount in excess of N$6.1 million.