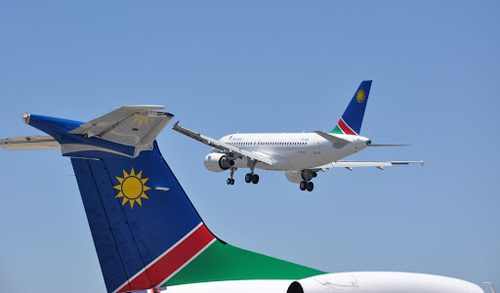 The beleaguered Air Namibia yesterday plunged into a leadership crisis after three board members suddenly resigned from the airline.
Board chairperson Escher Luanda and Heritha Muyoba resigned yesterday, while Willy Mertens tendered his resignation on Monday already.
The abrupt resignations came after a scathing letter issued yesterday from the board, alleging ministerial interference in the beleaguered airline’s day-to-day runnings.

Public enterprises minister Leon Jooste has since denied allegations of interfering in the affairs of Air Namibia, saying all activities were instructed by Cabinet.

Jooste was adamant that Air Namibia has since 2015 been on the agenda of Cabinet and the Cabinet Committee on Treasury.
“All of the associated activities were discussed and then either instructed or endorsed by Cabinet and/or the Cabinet Committee on Treasury.
“After those instructions or endorsements, the ministry was instructed to implement the various actions and to report back to the Cabinet committee,” Jooste told New Era.

He added the government will soon be in a position to provide more detailed information, saying he would then be happy to clarify any misunderstandings or misconceptions.

In a strongly worded statement, the Air Namibia board who assumed their duties on 1 January 2019 and appointed to ensure the airline breaks-even in three years, accused the public enterprises ministry of interfering in operational activities and by-passing the board by directly engaging employees and trade unions, negotiating contracts involving the company without the knowledge of the board, procuring advisory services on behalf of the company, initiating a restructuring exercise (without prior knowledge of the board) and managing the appropriated budget earmarked for the company without the involvement of the board.

“In fact, the airline had an amount of N$948 million in the 2020/2021 fiscal year from the Ministry of Finance and approved by parliament and the board has to date not been briefed on how these funds were disbursed to the airline if at all, other than a monthly allocation for employee salaries,” the Air Namibia letter reads.

The letter continued: “A recurring theme of the board tenure has been enormous financial challenges, which could be attributed to historic poor financial management, inappropriate business model, deteriorating brand equity, skills mismatch in strategic areas, ill-conceived route network, ageing fleet, and poorly negotiated leases, amongst others.

It was always clear that the organisation would require significant capital injection from the shareholder if the issues facing the airline were to be addressed in a comprehensive and holistic manner.”

Furthermore, referring specifically to last week’s liquidation application by Challenge Air, the board remained firm that the Ministry of Public Enterprises, as the sole shareholder, was engaged. The letter states that the ministry’s position was to leave the matter to the board, as long as the impression was not created that the settlement agreement would bind the shareholder.

“The board signed with the full understanding that the agreement had no guaranteed backing of the State and there is no single mention of the government/State/Ministry of Public Enterprises in the agreement. It should also be noted that the window of opportunity to file for liquidation remains open.

In all these, the board stands firm by its decision believing that the decision was taken in the best interest of Air Namibia,” the letter asserts.  Meanwhile, the Air Namibia board said it developed a new strategic plan which provides for restructuring the airline into a leaner, more competitive and sustainable airline.

“It is worth mentioning that, indeed the airline sits with historical debts (dating back to as far back as 23 years) and those debts that are government guaranteed need to be serviced whether the airline is liquidated or not. Currently, the airline owns an all-paid-for fleet of six aircrafts, and which can be utilised to generate revenue without the burden of lease costs.

The board has also long terminated all the loss-making routes and these are not part of the re-start plan. In summary: all leases will be terminated, all non-profit making routes are removed from our network, and most contracts and agreements are being re-negotiated.
Thus, we will be sitting with a very lean and cost-effective airline,” the board proclaimed.
The letter also cautioned about the severe impact of liquidating the airline, stating this would result in all more than 636 employees losing their jobs.

In contrast, the board stated that their re-start plan will preserve at least 50% of those jobs while enabling the airline to add value to the domestic economy.
– ebrandt@nepc.com.na