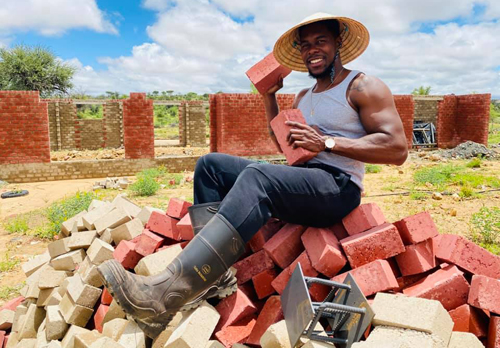 Like many, he wears many hats which include creative director, TV producer, financial analyst, model and running his clothing line among many, which make him a young, ambitious and multi-faceted Namibian.
What led him to these professions is nothing but sheer passion and dedication as his creativity is not limited and loves to explore and express what he feels plus refuses to be boxed.

“I have worked in finance as a financial data analyst, done TV commercials and walked runways across the world as a model, produced several TV shows working both behind the scenes and in front of the camera. I’m a director at the annual MTC Windhoek Fashion Week and I now run and creatively direct Zuriel, a Namibian luxurious clothing line.”

Hailing from Rundu in the Kavango East region, Luis Tshita Munana is the last born of six children (three sisters and two brothers).
He is mostly known as Luis, but at home, he is called Alivio and gave himself the name Zuriel. Zuriel as a boys’ name is of Hebrew origin, and it means “the Lord my rock”.
The 29-year-old former Big Brother Africa housemate. He represented Namibia during the ninth season of the show where he became the tenth housemate to be evicted on Day 28.

ALMA MATER
He attended the Noordgrens Secondary School in his hometown from grade one to 10. In grade 10 he became a head boy of the school, which is something that has never happened in the school’s history where a junior becomes a head boy.
After completing grade 10, he moved to Windhoek to do higher-level subjects because his school did not offer higher-level subjects at the time. He then went on to continue with his grade 11 at three schools, Windhoek High School, Jan Mohr and Hochland High School because the principals of the schools wouldn’t allow him to take five subjects at higher-level. So, he then finally settled at Academia High School.

LOVE FOR ANIMALS
“People don’t know that I love animals, plants and being outdoors. People see me and they don’t think I get my hands dirty by doing manual labour. “I posted a video of me working and people were shocked.”

BIGGEST BLUNDER
We all have our fair share of embarrassing moments and Munana is no different. “The most embarrassing moment would be performing as Sunny Boy on national TV during the MTC Knockout Project. I still laugh when I watch the clip. I had fun and it was for a good cause but still embarrassing. I would do it again.”

AT RANDOM
When he is bored, he makes fun of those close to him. “I bother people, send memes, video call or facetime or anything to kill my boredom through bothering someone else.”
“I wear my different hats depending on what’s needed at the time. But daily, I try to do as much as I can. Meditating, praying, gyming and dreaming is constant every day.”

Munana said his time is also spent gardening, watching TV. “In terms of travelling, I still have a lot to see where Namibia is concerned but currently Poppa Falls in the Kavango region tops them all for me.”
Apart from living his best life and enjoying treasurable and precious moments and sharing it with those in his circle, Munana helps others live their best lives too.

The missions he has embarked on touches many. “My projects impact thousands of lives. With Waka Waka Moo where my team and we create shapes and change children’s mindsets for growth. At the MTC Windhoek Fashion Week, we are positively shaping the fashion perception in Namibia for thousands since fashion is a billion-dollar industry.
He said the best thing about him and being ambitious is refusing to give up while also stating that ambitious can be too much as it can affect health. “I am ambitious and refuse to give up. That drives me to excel but the ambition I have sometimes become too much that it affects my health. Sometimes I don’t stop even when my body is tired.”

FOOD FOR THOUGHT
“Have a group of people around you who believe in you because when you feel like giving up, they will motivate you to continue. When you go broke they will offer you financial support.”
- psiririka@nepc.com.na

Reality TV show: Which couple would you like to see?

Opinion - Curfews do not stop spread of Covid

Bishop Frederick: A God fearing man of integrity passes on