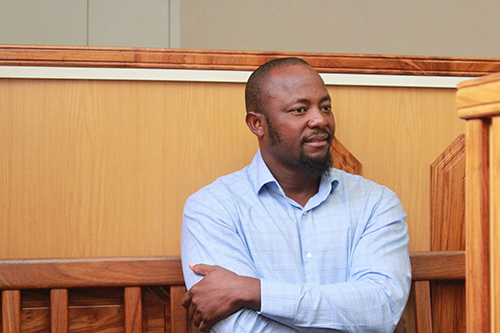 A key player in the Fishrot bribery scandal yesterday claimed a horse-mackerel quota of 18 800 metric tonnes was allocated to the ruling party for an election campaign in 2017.

Proceeds from the quota, which translated to about N$44 million, were paid into the accounts of two law firms, according to former National Fishing Corporation of Namibia (Fishcor) CEO Mike Nghipunya.

“We received the fishing quota allocation in 2018 and explained to auditors that it will be paid directly to beneficiaries. We received orders from [then fisheries] minister [Bernard Esau] that we must implement it as such – and for [the] sake of sensitivity, we must call it government objectives,” said Nghipunya, who was testifying under oath during the second day of his formal bail application, lodged by him and five of his co-accused.

“There was a quota for Swapo as a third party, but it was not handled by the National Fishing Corporation of Namibia. Over 18 000 metric tonnes were allocated and proceeds were paid directly to Swapo for the 2018 and 2019 campaigns.”

When asked by Popular Democratic Movement (PDM) leader McHenry Venaani yesterday as to whether Swapo has received N$44 million from the Fishrot proceedings to finance her party’s political campaign, Nandi-Ndaitwah said, “I want to make it clear that to the best of my knowledge and to the record that is in the hands of the Swapo secretariat, we have no record of anything to say that our party has received the so-called Fishrot money. Therefore, whoever is having such evidence, our books are there to be investigated”.

Nghipunya estimated the quota was worth around N$44 million, and denies that funds disappeared from Fishcor. The prosecution opposes Nghipunya’s offer of N$200 000 bail. The once-struggling actor said governmental objective fishing quotas are geared towards socio-economic, cultural and other objectives but it is a very broad provision.

“These objectives are determined by the ministry of fisheries. ”Nghipunya, in testimony for his bail application following his arrest a year ago, informed High Court Judge Shafimana Ueitele that N$5 million was paid to Sisa Namandje’s law firm in 2017 – and the first payment of N$14 million was paid to De Klerk, Horn and Coetzee law firm.

The value of the quota at N$2 500 per metric tonne stands at around N$44 million. Nghipunya on Tuesday told Ueitele he has no reason to run away, as he has done nothing wrong. Yesterday, he said the allegations against him are “unfounded” and based on a misunderstanding of the workings of such quotas. Nghipunya was fired from Fishcor in November 2020.

This was not the first time Swapo denied unduly benefitting from the scheme that saw two Cabinet ministers resign in 2019 and spent almost two years in jail, awaiting trial.  In July, during a press briefing at the party’s headquarters, President Hage Geingob denied the ruling party received funds from the Fishrot scandal.

«Swapo party did not get any direct contribution from whatever is in its audited books,» he said. At the same event, secretary general Sophia Shaningwa said, “Every year, Swapo party books are audited by professional, registered, recognised international and national auditors”.

“This was flagged as suspicious. Part of this money was used for vehicles, personal loans and other items. And as far as investigations found, monies were used for the Swapo campaign,” testified Olivier.

Nghipunya and his co-accused: Esau, Sacky Shanghala, Tamson and James Hatuikulipi, Pius Mwatelulo and Ricardo Gustavo stand accused of corruptly receiving payments, including charges ranging from racketeering to fraud and money laundering to give a competitive advantage to Icelandic fishing company Samherji in securing access to horse mackerel quotas in Namibia.

Also on the list of people added to the charges is lawyer Marèn de Klerk. The State is yet to extradite De Klerk from South Africa and Icelandic nationals Ingvar Júlíusson, Egill Helgi Árnason and Aðalsteinn Helgason.