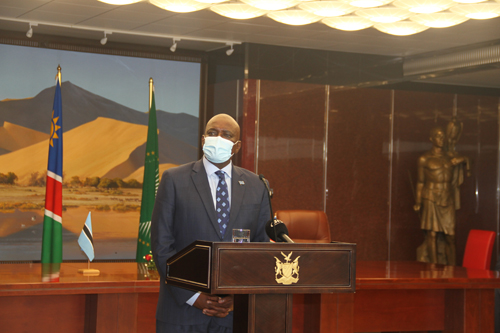 The much-awaited joint investigation report into the shooting incident of three Namibians and a Zambian national by the Botswana Defence Force last year is not yet for public consumption, Botswana leader Mokgweetsi Masisi said Friday.

According to Masisi, there is still a judicial process that still needs to be completed in Botswana before the report is released to the public.
“As is the case in Botswana and the incident took place in Botswana, there is a judicial process. Unfortunately, for the time being, the matter is sub judice,” Masisi, who was in Windhoek on Friday for a one-day working visit, told reporters at State House. “There is a process that still needs to be completed in Botswana. I would advise strongly not for the report to be made public until so authorised by a competent court. The content of the report established all the facts. Let us not go ahead of the truth, until the competent court authorises it.”

The investigation into the shooting was completed last year and a report was submitted to the two heads of state for assessment. Both Masisi and President Hage Geingob have supported efforts for a speedy investigation into the unfortunate incident, which last year triggered unprecedented protests in the country.
The three brothers, Tommy (48), Martin (40) and Wamunyima Nchindo (36), and their cousin Sinvula Muyeme (44), were shot by the BDF on 5 November along the Chobe River. At the time, the BDF claimed they were poachers. The brothers’ mother Alphonsina Nkungano Mubu (69) also died suddenly from a suspected heart attack days after their killing.
The family and witnesses insisted the four were not poachers. Since the killing, Namibians have held protest marches to denounce Botswana’s controversial so-called ‘shoot-to-kill’ policy, which according to reports has claimed 37 Namibian lives since independence. On Friday, Masisi rejected assertions his country was having a ‘shoot-to-kill’ policy.
“We do not have a policy to shoot and kill, or a programme, project, or whatever you call it. As often something happens a number of times and repeat itself, a label is put to it. People begin to use language and that is what seems to have happened in Botswana with this so-called ‘shoot-to-kill’ policy.
“Every nation has rules of engagement in its territorial space. And we are no different in Botswana. But we are not a threat to people or institutions going killing willy-nilly. We are not trigger happy, even the Botswana police or BDF, we follow due processes and respect life,” he defended.
Masisi also added the shooting was unfortunate and regrettable. “If we could unwind time and be able to prevent it, I would be the first among to prevent it.
“That unfortunate incident happened. It is incumbent upon me to reach out to my brother, his people and resolve it. The three Namibian men who lost their lives are blood relatives to the chief in Botswana,” Masisi noted.

‘Do you want war?’
Meanwhile, Geingob did not take lightly to those threatening government with legal action for allegedly failing to defend citizens following the BDF shooting fallout.
“I want to recruit young men to fight a war in Botswana. Do you want a war? Those who want to fight let them come so I train them myself,” Geingob said wryly. “What else do you want? Do you want war? So let’s not do these things. You are second-guessing us. Must we sit and cry to show you are okay.
Your presidents stood up and said ‘we regret and our condolences’. What else do you want?” The head of state also took on Namibians whom he said accused him of being the spokesperson of the Botswana government.
“Let’s show some kind of respect, please. It is true that is a loss. I am sorry for them but dictating what we must do, you are not going to get that from me. You must show some kind of respect. We are dealing with this issue. If people are trying to use it for other issues then just tell us.
“There are courts to follow up. This thing happened in Botswana. I fought for this country. We were demonstrating against apartheid everywhere. I am not going to stop people from demonstrating peacefully.” Geingob warned those demonstrating not to tell lies or instigate people for their own agenda, saying he has spoken to the family on the issue.

Want report released
Meanwhile, the Namibian Lives Matter Movement at the weekend claimed Botswana was simply buying time by not making the report public.
The group also claimed the draft report was “implicating and pointing to nothing but BDF aggression and execution style killing”. The President of Botswana found a new term to bring confusion and stated that the investigation report is sub judice hence it will not be released prior to Botswana courts completing their work, which are subject to that investigation report, the movement said in a statement.
“If this is true, and we know it is not true as Botswana is buying time. Why didn’t the Namibian president say this earlier on? Even Hengari, the Press Secretary in the Presidency said the head of state will release the report after studying and not sub judice. Who is fooling who here?”