Home / Beukes pens Through the Eyes of an orphan

Beukes pens Through the Eyes of an orphan 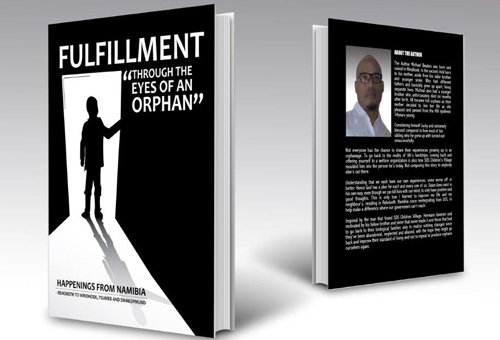 Being an orphan is quite hard for most children, as it means you are now responsible for your own life with no one to help you navigate through this thing called ‘life’.

Michael Beukes (37), a resident from Rehoboth, decided to pen a book, titled Fulfilment “Through the eyes of an orphan”, which details his experience growing up.

Beukes owns a small barbershop in the town, and he told Entertainment Now! he started writing the book in 2011, and it was inspired by his fellow orphan’s that have since passed on.

“I wanted to tell my story as an orphan, how I found fulfilment and live a productive life to encourage the youth that is vulnerable and also those coming from orphanages, and failed school and have to face the harsh realities of life to make a living for themselves, and not to repeat our parents’ mistakes to abandon our children and to help where our government can’t reach with mental health challenges and unhealthy addictions among the youth,” he explained.

Beukes never met his father, and his mother abandoned him when he was just five years old. He had to face the harsh reality of not being loved and drifted from one family member to another.

“The way I searched for love and a sense of belonging – not even my biological family could give me that because we suffered from poverty and alcoholism, and days went by when there was no food; we scavenged the restaurant dustbins in Windhoek,” he said.
His uncle, Brain and my late grandmother took him to the SOS Children’s Village for a better life for 15 years.

“To tell you the truth, I was lucky to have gone to SOS – and they gave me every need a child can ask for: shelter, food and education – but in all honesty, I craved for motherly love and I got glimpses of it – and because of the lack of love, I started to feel rejected and this made me become naughty, stealing, lying, turning at the prison door and later ran away. The more I was in the village, the more I wanted to be outside – not caring about anything or anyone; that’s why I had to find God for fulfilment.”

These are just but some insights the book has, hoping that somebody from the private sector or government can read this book, so that they can collaborate and help open a soccer academy, to give education, self-belief and a sense of belonging to achieve anything, especially with vulnerable children, starting with his town, Rehoboth – and also encouraging reading because information is power.
So far, the book is only available on e-book, and when he obtains enough funds for the hard copies, he plans to have it at the national library and local shops around Rehoboth – and later to other towns around the country.

The original version is in English, which he wrote with the help of Boet Matthews and translated it into Afrikaans, his native tongue, to reach more people as possible
The e-book version will cost N$200 and readers will receive a free hardcopy. For those who are willing to wait for the hardcopy, it will be N$150. Beukes can be contacted on his number at 0812894327.
- slunyangwe@nepc.com.na