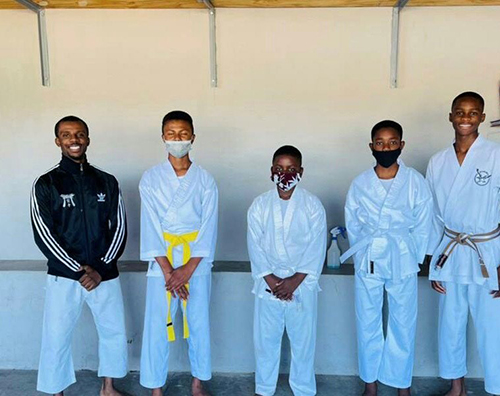 Michael Nakapandi was not the most-confident child but exposure to karate has boosted his confidence tenfold, and now he helps others overcome their lack of confidence and build self-esteem.

“My first exposure to karate was early in my childhood when my cousins in the northern parts of the country trained under Renshi Freddy Mwiya. I found interest in it, so my father made sure to find an academy for me here in Windhoek,” explained the 23-year-old Namibia University of Science and Technology (NUST) accounting student.

Now a sensei, Nakapandi started at the age of 11 at Karate-Zen in Khomasdal, and has been training under the same club for 12 years.

“As a kid, confidence wasn’t something that came easy to me. With karate, I learned to be more confident in myself which is one of the reasons I have stuck with it amongst many other reasons such as improving my self-defence skills, the adrenaline that pumps through my veins during practice, and the opportunities karate has handed me,” he stated.

He recalled: “Interestingly enough, I noticed in one of my students the same lack of confidence that I once possessed as a child and I must say, I feel a sense of pride, saying that I am a part of their journey in helping them overcome this lack of confidence, and how karate plays a huge role in that as an interactive sport”.

Nakapandi’s ultimate aim is to play a bigger role than just teaching karate. He aims to instil discipline, social skills, humility, and goal orientation in students.

He is proud that the sport has grown “immensely” and as a national team athlete, would want to see athletes from his dojo represent Karate Namibia and achieving more than he has and yet to achieve.

“I look forward to expanding my space to accommodate more students as I’m currently operating in a garage at home. I believe I will achieve it and have a fully-equipped, big enough dojo with more than 50 active students one day,” said the optimistic Nakapandi.

He has represented the country at various competitions, including Region 5 in Zambia, Botswana, South Africa, and Commonwealth Games which took place in Johannesburg, South Africa.

Nakapandi has also participated in Rwanda, All Africa Games in Morocco, World Champs in Spain, with his most recent event being the Olympic Qualifiers held in France earlier this year.

When he is not in karate mode, he trades expertise as a freelance graphic designer, visual artist, dancer, and accounting student.