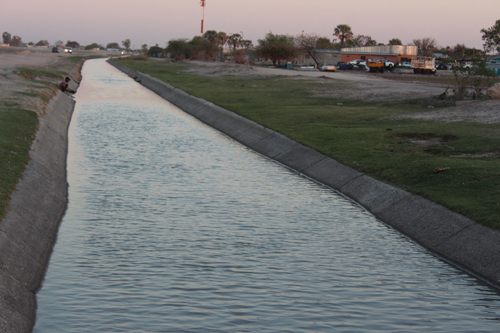 NamWater, through the Central Procurement Board, awarded bids valued at a combined cost of N$93.5 million to two contractors tasked with reconstructing some 5.8km of the Omahenene to Olushandja canal in northern Namibia.
Section A of the project was awarded to Radial Truss Industries in a joint venture with Imperative Construction and Engineering and Section B was awarded to Brumar Construction.

Speaking at the groundbreaking of the project, Minister of Agriculture, Water and Land Reform Calle Schlettwein explained the contractors are expected to reconstruct the canal and restore it to its original design so that it can continue to serve people in the area for many more years to come.

“This project is only the beginning of the reconstruction programme of the entire canal as the entire stretch from Omahenene border post to Oshakati is in bad shape and will have to be reconstructed soon. I would, therefore, like to urge the contractors to give us quality work so that this canal can last for even longer than the 49 years that it has been in existence,” said Schlettwein.
Schlettwein noted that through the years, NamWater has spent millions of dollars annually to maintain the canal, but added that some of the spendings could be prevented.

“Some members of the communities along the canal have sadly been vandalising the canal deliberately either to make it easy to catch fish or to enable water to flow into nearby ponds for livestock to drink with ease. Such practices need to stop and I urge NamWater to work with law enforcement agencies so that such culprits can be brought to book,” Schlettwein stated.
In addition to maintenance costs, NamWater spends millions of dollars paying for electricity to pump water into the canal from the Calueque Dam.

The minister bemoaned the fact that NamWater loses a lot of canal water to evaporation and illegal offtakes by farmers who set up irrigation gardens along the canal.

Said Schlettwein: “The proliferation of illegal offtakes along the canal has become a major concern as NamWater is now struggling to get sufficient water to the Oshakati Treatment Plant as the bulk of the water it pumps from Calueque Dam is used up by the farmers before it reaches the furthermost treatment plant. It is even more concerning that NamWater through government funding is in the process of doubling up the capacity of the Oshakati plant and it will spend possibly close to N$500 million on that project, but the new plant may not be in a position to receive sufficient water to treat if more water continues being lost from the canal before it reaches Oshakati.”

Schlettwein urged communities along the canal, under the guardianship of the traditional authorities, regional councillors and the governor, to look after the canal, calling it a lifeline for close to half of the Namibian population that live in the northern regions.

The majority of Namibians in the four northern regions of Omusati, Oshana, Ohangwena and Oshikoto get supplied with fresh water from Calueque Dam in southern Angola. This water is transported in the open canal that runs for about 150km from Angola and terminates at Oshakati. NamWater operates four treatment plants that treat this water to make it safe for human consumption, with these plants located at Olushandja, Outapi, Ogongo and Oshakati.

“This canal was not only built to supply potable water for the Namibian population in this part of the country, but it is also meant to cater for agricultural production. It is for that reason that one of the government’s largest green scheme projects – the Etunda Irrigation Scheme, was set up in this region and it is being supplied with water by this very same canal. One can, therefore, see how central this infrastructure is to the livelihoods of our people, agricultural production, and the economy of the northern regions at large,” Schlettwein added.

The section of the canal being reconstructed was first built in 1972, almost 50 years ago. For these past five decades, NamWater has been maintaining the canal to ensure water flows to consumers without disruption.
However, Schlettwein concluded: “There comes a time when maintenance costs become unsustainable such that total reconstruction of the canal becomes necessary.”
- ebrandt@nepc.com.na