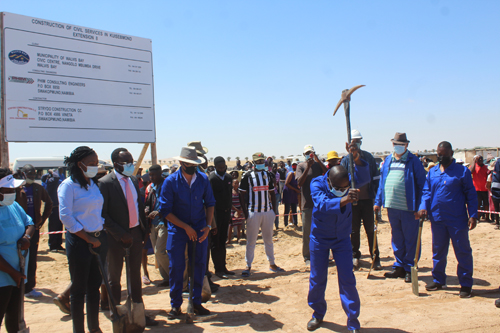 WALVIS BAY - Urban and rural development minister Erastus Uutoni has urged the Walvis Bay municipality to accelerate land development in order to address the housing challenge at the harbour town.
Uutoni was speaking at the groundbreaking ceremony for the construction of 121 houses for the fire victims of Otweya that was held yesterday at Walvis Bay.

Government through the Office of the Prime Minister provided building materials on land that was allocated by the Walvis Bay municipality to build proper houses for the residents that have been living in tents, following the devastating fire on 17 July last year.
The beneficiaries are building the houses themselves under the guidance of the Shack Dwellers Federation of Namibia.
Apart from Otweya residents, thousands of other inhabitants at the town are currently living in backyard shacks due to the lack of affordable housing.

Hence, Uutoni called upon the council to come up with workable solutions along with central government to address the housing needs at the town. “The provision of basic infrastructure and services remains one of the top priorities of government at all levels. As a line ministry, I will continue to lobby for more funds for local authorities because it is you who are working closely with the electorate and are also familiar with their needs and aspirations,” Uutoni said.

He added that the Otweya houses speak volumes of government’s commitment to address the housing challenge in the country, particularly in the informal settlements.

“Government recognises everyone’s right to decent living, including housing. In that respect, central government immediately made funds available for the servicing and construction of houses for the families that lost their homes in the fire,” the minister said.
edeklerk@nepc.com.na