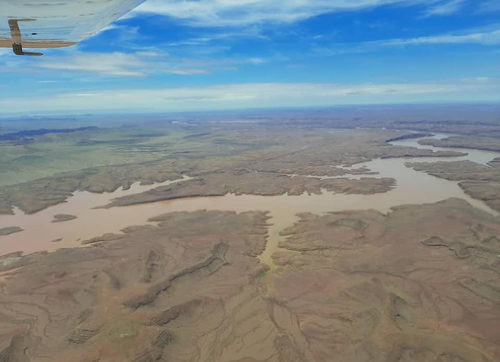 “Widespread heavy rains in the southern parts of the country led to a significant runoff in the Orange-Fish catchment, resulting in rivers flooding, a rise in the reservoirs storage levels and releases, damage to road and agricultural infrastructure,” she said.
Ephemeral rivers notably the Fish, Lowen and Guruchab rivers came down in flood, resulting in major inflows in most storage reservoirs, such as the Naute, Neckartal and Hardap dams.

The Orange River flows significantly increased due to the recent heavy rains in the southern parts of Namibia and the Northern Cape in South Africa. Moreover, she said the floodwaters from the Fish River reached the confluence with the Lower Orange River at Sendelingsdrift and passed the 6-meter mark yesterday. The floodwaters have receded, and the river level yesterday was at 1.6m at Sendelingsdrift. “Water users along and further downstream of the Lower Orange River are advised to be on high alert for possible flooding and to take the necessary precautionary measures,” she cautioned.

Central dams such as Swakoppoort and Von Bach also received significant inflows, with levels now at 70.4% and 73.5%, respectively.
Last year, during the same period, Swakoppoort stood at 5.3%, while Von Bach was at 39.8%. The Goreangab Dam did not record any significant inflow this year, compared to last year, where it was 100% full during the same period.

The Tilda Viljoen Dam stood 23% full in capacity this year, compared to 30.5% last year, while Daan Viljoen Dam recorded 18.4% this year, which is low when compared with 2020’s reading of 65.5% full capacity.