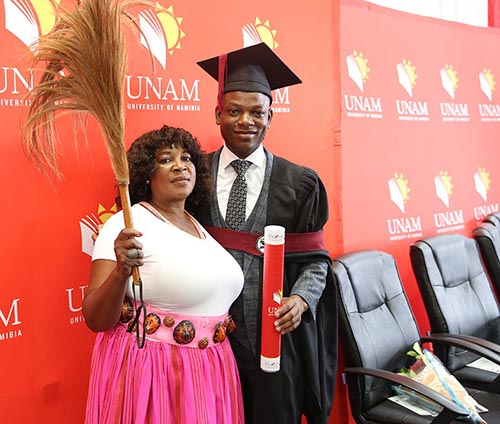 Naapopye Uulenga, a deaf student under the Faculty of Education and Human Sciences, recently obtained his Bachelor’s of Education, showing that determination can overcome any obstacle.

During an interview with Unam Forum Online, Uulenga shared his journey to graduation, and stated that having been abandoned by his father at birth has altered his life and has led him to the pursuit of bettering his future.

“My father came to the hospital when I was born and upon finding out that I was deaf, he abandoned my mother and I. Growing up, I was saddened by this
because I didn’t see my father for years, and there were tough times when I really needed him,” he explained.

Uulenga said he was lucky enough to have a strong mother who loved him and wanted the best for him. His mother eventually took him to a special school that afforded him basic communication skills as a child.

He, thereafter, attended the National Institute of Special Education, a school for visually- and hearing-impaired learners from 1999-2013, which he said made his life easier because all the teachers knew sign language.

Uulenga later transferred to an inclusive school, Cosmos High School, where he completed his grades 11 and 12 with the assistance of two interpreters. However, this advantage had its own challenges, as the interpreters would not be in a position to present classes on some days.

Uulenga first dreamt of becoming an engineer, but having obtained only 22 points in grade 12, he could not be admitted for that course.

“However, I was too determined to further my studies to let that stop me. I then opted for education because I wanted to be a good example to other deaf kids growing up – that they too can have a better future,” he noted.

According to him, university life was tough. During his third year, he found research very challenging due to the unavailability of interpreters. This, coupled with debts – as his NSFAF loan was put on hold – led him to de-register for two years.

“I knew I was close to the finishing line, so I returned to Unam in 2020. I now have finally obtained my honours degree,” said a jubilant Uulenga.

“I feel very happy, and I am thankful to God for giving me the strength to complete my studies.”

He also stated that he has made his mother very proud, and that he hopes to one day repay her for her love and support.

Uulenga is inspired by persons with disabilities who still manage to change the world and inspire others like him. This, he said, includes a deaf-blind woman, Helen Keller, and a deaf man, Dr. Andrew Jackson Foster, whose pioneering contribution to deaf education in Africa motivated him to seek inner confidence and to be persistent in life.

“I’m optimistic about the future, and I hope I end up teaching as well as inspiring hearing-impaired children that they too can do anything and achieve any level of success that they dream of.”