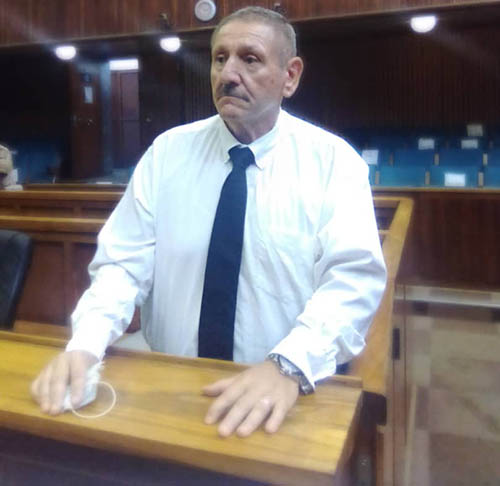 A senior police officer based in Swakopmund yesterday testified about how he discovered the whereabouts of a firearm allegedly used to murder two senior executives of the Namibian Institute of Mining and Technology in Arandis.

According to Chief Inspector Rafael Litota, he was at the murder scene on 27 April 2019 and remembered the information they received about a white bakkie leaving the scene in a hurry using a dirt road behind the campus. He then decided to see if he can find the tracks of the vehicle and follow it.

He further said that he discovered tracks that were made by a fast-moving car. This he could determine as a car that moves fast makes deeper tracks than the one
that drives slowly, he explained. “I found some tracks that looked like they were made by a very fast-moving car and followed it,” he told the court. He went on to say that he followed the tracks until he came upon two small bridges that span over a small river where they stopped. He then got out of his car and saw the prints clearly in the sand and realised they were similar to those he observed on the tyres of Ernst Lichtenstrasser who was a suspect in the murders.

He further said that he also observed boot prints and to him they too were similar to boots that the accused was wearing at the time of his arrest.

He further told the court that he then returned to Walvis Bay and during a meeting between the investigators and the top brass, he told Erongo police crime investigations coordinator Erastus Iikuyu about his trip and that he suspect the murder weapon was hidden somewhere there.

He said that Iikuyu at first ignored his information, but later on called him on 17 May 2019 to show them where he found the tracks. He then took them to the place and after a search they found where the vehicle turned of from the dirt road and drove into the desert.

He further said that they found a place where a stone was put on a place where it looked to have been dug and the police cordoned it off. After the scene of crime officer arrived and took photos of the scene, the rock was removed and from a shallow hole, pieces of the suspected murder weapon were removed, including bullets, a holster, a frame and a barrel.

The exhibits were then put in a forensic bag and sealed before being taken to the Arandis police station and from there to the Namibia Police Forensic Science Institute in Windhoek.

Lichtenstrasser is on trial for the murder of Eckhardt Mueller who was the executive director at the time and his deputy Heinz Heimo Hellwig who were gunned down at the entrance of the Arandis NIMT offices at the Erongo mining town on 15 April 2019.

He did not provide a plea explanation and his lawyer confirmed the pleas and told the court his client will make use of his constitutionally guaranteed right to remain silent and put the onus on the State to prove each and every allegation against him. The State is represented by deputy prosecutor general Antonia Verhoef and Lichtenstrasser by legal aid lawyer Albert Titus.

The trial is presided over by Windhoek High Court Judge Christie Liebenberg and Lichtenstrasser remains in custody.