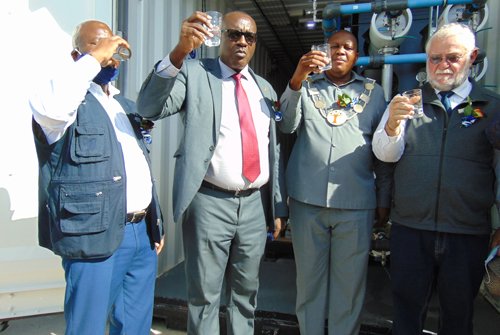 ONGWEDVIA - A newly cons t r uc t ed 500m3 reservoir and defloration plant were inaugurated on Monday to ensure sufficient and quality water supply for the residents of Eenhana.

The facilities, constructed at a cost of N$21.6 million, were inaugurated by the Minister of Agriculture, Water and Land Reform, Calle Schlettwein. The minister said the construction of a bigger water reservoir became necessary as the town continues to expand.
The old 750m3 storage that was previously serving the town became insufficient and the 48 hours water supply storage was no longer feasible,
he said. The defloration plant will enable NamWater to supply quality water by removing excess fluoride from borehole water to make it suitable
for human consumption.

The plant was constructed with the assistance of N$5.6 million from German government’s Bundensantalt für Geowissenschafen and Rohstoffe
(BGR). Eenhana has also been getting its water from Oshakati via Omafo, and that water originates approximately 300 kilometres from the Calueque Dam in south-west Angola via an open canal conveyance system.

“Although that system ran smoothly for some time, the huge water demand placed on the Oshakati treatment plant has insufficient water
reaching Eenhana in recent years,” said Schlettwein.

The minister said water from the borehole was not fit for human consumption, which then necessitated the construction of a fluoridation plant.
The fluoride level of water ranged between 3.0 and 4.0 milligrams per litre.Although water is, at the moment, supplied from three boreholes,
Schlettwein assured that the government, through NamWater, is at an early procurement stage to seek service providers who will drill more
boreholes to improve bulk water supply for the Omafo-Eenhana and Omakango-Onambutu-Eenhana water schemes.

“This will lead to improved availability of potable water to more communities in the Ohangwena region,” said Schlettwein.
The minister also urged members of the community to guard against water wastage and vandalism of water infrastructure to avoid the wastage
of already-scares resources. He further urged the Eenhana town council and other communities benefiting from these infrastructures
to honour their water bills, as the money will enable further investments in the water sector.

Meanwhile, NamWater’s CEO Abraham Nehemia said the old facilities were constructed by the government in the 1990s and can no
longer supply sufficient water. This, Nehemia said, is due to an increase in water demand, caused by economic and agricultural development in the regions. Eenhana Mayor Omri-Onn Kavandje, on his part, noted that Eenhana is unique, compared to other local authorities in terms of
water supply, as it no longer needs to rely on the Calueque water supply via the Oshakati-Omafo pipeline.
“We now rely on the Ohangwena ll Aquifer for a constant supply of freshwater, courtesy of the boreholes on this site,” Kavandje said.
- nashipala@nepc.com.na
- Additional reporting by Nampa