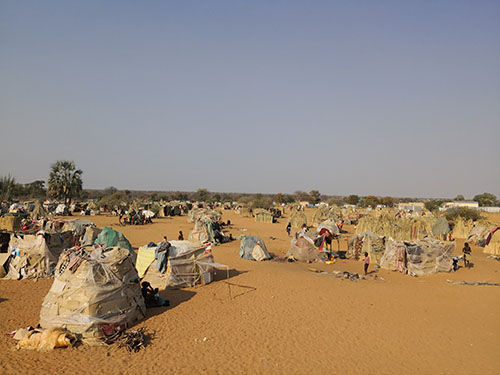 ETUNDA - Following the rise in numbers of Angolan migrants, the governor of Omusati region Erginus Endjala said the existing camp accorded to the migrants at Etunda has become too small.

As such, the arriving migrants are now being accommodated outside the camp, as there is barely space inside for more people. There are now 355 migrants camping outside.

There are 3 000 migrants at the camp. The governor said there are 1 784 children and 71 pregnant women. There are 198 men and 630 women altogether. Endjala said the situation is now critical because the number is continuously changing as there is a new group arriving almost daily.

“The camp cannot sustain the growing number. The number is too big now because we now have more migrants arriving on a daily basis,” said Endjala.

Meanwhile, Endjala said there is progress in talks to repatriate the migrants back home. He said his office has received communication that the Angolan government is busy reconciling the number of the existing immigrants to prepare their repatriation.

The idea for repatriation was initially received with mixed feelings when it was sold to the migrants this year. While some were eager to go when it rains, others refused to go, fearing that they will be abandoned when they are back home.

A caretaker at the centre Peneyambeko Joseph who took care of the first migrants who arrived earlier this year said the situation of the migrants has changed compared to when they first arrived.

The ones who have been in the camp now look healthy, thanks to the support of the Namibian government, private organisations and individuals who continue to support the migrants with their daily needs. Joseph said the challenge now at the camp is resistance to getting to the hospital for medical treatment, as they are not too accustomed to the hospital.