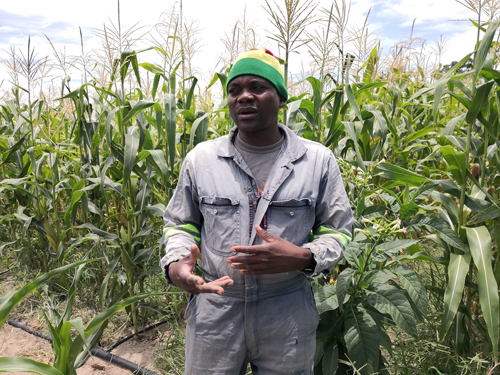 EMONO - In the quest to increase food security in the country, the ministry of agriculture through its horticulture support programme last year aided 308 small-scale farmers and backyard gardeners with input to improve their produce.

The programme kicked off last year in April and subsidises farmers with 65% of their total request from the ministry.
About N$5 million has been set aside yearly since last year to assist farmers, national coordinator for the programme James Nzehengwa has revealed.

Nzehengwa said the programme was initiated to improve food security and nutrition across the country targeting mostly women and the youth.
To date women are taking the lead in the project. So far, the programme coordinator said, the impact is being felt as farmers are not only able to produce food for themselves but produce enough to sell and subsequently generate an income.

The programme benefits farmers with very limited land of 0.01 hectare to those that have half a hectare. He thus called on the youth and other eligible community members to apply to receive the subsidy. “Our call to the youth is that the opportunity is there for them to get involved in agriculture and create employment for themselves and others,” said Nzehengwa. At Emono village on the outskirts of Oshakati, Paulinus Elago (36), had developed a passion for agriculture at a tender age when he was just in grade 8.

During that time, he put up a nursery at home and after completing his matric he started a small garden at his parents’ home growing spinach, carrots and tomatoes to sell. A trained mechanic, Elago said he used his time whilst training at a local vocational school to sell plants from his nursery.

“It was at that time that I realised that I could generate money from agriculture,” said Elago. After completing his course, he raised money and started a garden with his friend Erassy, and the rest is history.

He started off with one drip irrigation line watering 16 lines, but his garden has since expanded and now employs 10 people, including himself.
Passionate about his garden and agriculture in general, Elago said he wanted to do away with not having and buying food, especially goods that he has the ability to produce such as vegetables.

“We cannot be buying everything, some things we need to produce – it was my stomach that drove me to start this garden,” said Elago. Elago said what started off small two years ago is now generating an income for himself and nine other people.
“This has become a one-stop area for many households in the area,” said Elago.

He received a subsidy to buy drip irrigation materials. Another beneficiary, Anna Niipare (69) from Okatana in the Oshana region, has dreams of expanding her garden to employ at least two or more people. A former driver at Ondangwa Town Council, the pensioner now produces enough to sell to her community.

“I drive around in the community and sell from house to house and so far the business has been good,” said Niipare.
Niipare grows a wide range of vegetables including spinach, carrots, tomatoes, green peppers, amongst several others.
She received a subsidy to buy a water tank, shade nets and drip irrigation pipes.
Despite the flourishing garden, Niipare’s garden is confronted by challenges such as a lack of water when her self-dug dam dries out and people stealing her produce.

Despite her setbacks, she says that the benefits outweigh her challenges and thus pleads with fellow Namibians including women and the youth to take part in producing food. “Let us do our part in producing food. Nothing good comes out of idling around,” urged Niipare.
At Ekuku, Elizabeth Kamari (64) received a subsidy to buy a water tank, poles and seeds to advance her garden last year in August. Although she was able to produce and sell in the community last year, Kamari wants to be capacitated to enable her garden to flourish.

Also passionate about gardening and producing her own food, Kamari said she struggles to grow her produce as some do not grow as desired. “I need the ministry to capacitate me through training because I have the will and space to grow my garden,” said Kamari. In addition to that, Kamari said she is also challenged by the availability of water as she is using potable water, which is pricey and not always affordable.
– nashipala@nepc.com.na