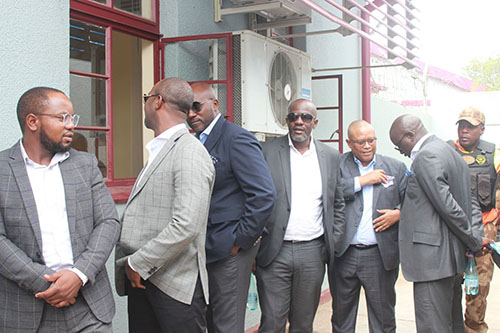 The highly publicised Fishrot scandal returns to the spotlight this morning when six of the accused present their arguments before Windhoek High Court Judge Shafimana Ueitele following their application to be released on bail.

It could, however, not continue as Thabang Phatela on behalf of Nghipunya was not available and the senior counsel appointed for Shanghala and James was also not available. It was not disclosed who this senior counsel will be, but reports are rife that it would be leading South African defence lawyer Barry Roux. Roux once represented South African star athlete Oscar Pistorius before his murder conviction.

During yesterday’s session, Ueitele was not happy with what transpired and remanded the matter to today. He sternly warned the parties that he will not allow unnecessary postponements and that the bail hearing will continue.

Shuudifonya and Mwapopi will be represented by Milton Engelbrecht during the bail application. Windhoek High Court Judge Christie Liebenberg recently ordered the two trials, previously known as the Namgomar and the Fishcor matters, be joined and conducted as one trial. At the time, the judge said the State has managed to prove former Cabinet ministers and businessmen in the fisheries bribery case, all acted with the same purpose for the benefit of their “criminal enterprise”.  Liebenberg said the illegal enterprise articulated in the Fishcor case is inseparable from the enterprise articulated within the Namgomar matter, as it was important for the planning and execution of the latter.

He further explained despite the different parts the accused played, the evidence would remain the same to prove the conspiracy between them or the individual accounts on which accused Ricardo Gustavo has been charged.  “The spoils generated from the unlawful enterprise are the proceeds of crime and must be proved in both cases. To this end, a duplication of evidence would not be in the interest of the accused person neither the interest of justice,” explained Liebenberg.

Liebenberg made these remarks before granting the State’s request to have the two criminal cases, Namgomar and Fishcor, consolidated as one.  During the application, deputy prosecutor general Ed Marondedze argued the prosecution would have to present testimony from the same witnesses in both matters should the cases not proceed as one.

He said it is essential for the two matters to be joined for one trial for the court to understand the gravity of the case and to get the full picture of how the alleged criminal scheme was set up.  The application was opposed by Shanghala, James, Nghipunya, Namgomar Pesca Namibia director Ricardo Gustavo, Mwatelulo, Shuudifonya, Mwapopi and Shanghala’s lackey Nigel van Wyk.