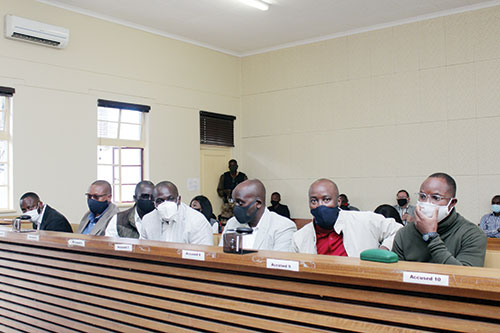 An attempt by several Fishrot accused to have High Court Judge Orben Sibeya step aside from a case in which the suspects’ assets have been frozen by an order of the court failed when their application was denied yesterday.

Sibeya dismissed the recusal application with costs, citing the group failed to prove double reasonableness required; a reasonable and informed person must base the perceived bias on reasonable grounds.

Former minister of fisheries Bernhard Esau, his wife, Swamma, his daughter Ndapandula Hatuikulipi, his son-in-law Tamson Hatuikulipi and former director of Investec Asset Management in Namibia, Ricardo Gustavo filed an application to have Sibeya recuse himself from the main case. Swamma and Ndapandula are not facing any charges.

The group indicated that Sibeya as a judge has a reasonable apprehension of bias, in that he was employed as a public prosecutor and had a close relationship with the prosecution and Prosecutor General Martha Imalwa. Furthermore, he previously represented Imalwa’s son in a criminal matter between 2012 to 2014.

They also indicated Sibeya did not read all the voluminous documents forming part of the application for a provisional restraint order and, therefore, did not approach the said application with an open mind.

It was their submission that Sibeya was involved in the creation of the office’s Corruption and Money Laundering Unit dealing with the Prevention of Organised Crime Act (POCA) cases within the office of the prosecutor general.

But Sibeya noted that he and the PG only had a professional relationship like any other deputy prosecutor generals that report to her.

“For one to harbour an alleged perception of bias emanating from the fact that over nine years ago I was head of the Corruption and Money Laundering Unit, therefore I should not preside over matters from that unit will be unreasonable, to say the least,” said Sibeya.

They are all facing counts of fraud, bribery, corruptly using the office for gratification, money laundering and conspiring to commit corruption.

They are accused of acting in common purpose with the intent to defraud the Namibian government by signing a bilateral agreement purporting to be in the interest of Namibia but instead entered into the said agreement for their benefit.

The prosecution is further alleging some of the accused received more than N$103 million in bribes from an Icelandic fishing company, Samherji, for the continuous supply of horse mackerel quotas in Namibia.

The group, along with former Fishcor CEO Nghipunya, are also facing fraud charges relating to N$75.6 million, allegedly channelled from the State-owned company to several law firms and entities for their benefit.

All accused, except for De Klerk, are currently in police custody after attempts to have them released on bail have thus far failed.

For their application, the group was represented by Richard Metcalfe, Florian Beukes and Trevor Brockerhoff.