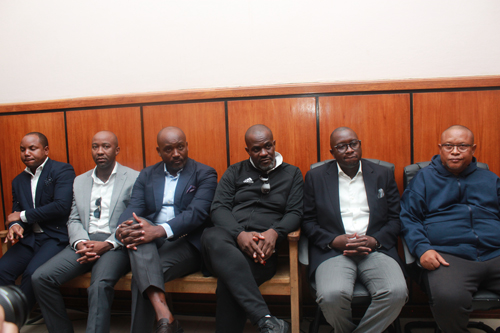 The prosecutor general’s decision on where and on what charges to arraign the six men accused of receiving bribes in the region of over N$103 million from Icelandic fishing company Samherji for horse mackerel quotas is expected today in the Windhoek Magistrate’s Court.
Magistrate Ivan Gawanab postponed the matter in December last year after the prosecutor Ed Marondedze informed him that in line with the instruction of magistrate Vanessa Stanley that a further postponement for investigations would not be allowed by the court, the Anti-Corruption Commission (ACC) had finalised its investigations and the matter was ready to be sent to the PG for her decision.

Gustavo was also the sole director of a company called Nengomar Namibia which was used to divert the quotas to Samherji.
According to information available Esau and Shanghala forged a bilateral cooperation agreement with Angola’s former fisheries minister, Victoria de Barros, her son Joao de Barros and one Antonius Fransisco for the allocation of quotas to each other.

Two entities were then established, Nengomar Pesca in Angola and Nengomar Namibia, which were used to allocate the quotas.
According to the charges, the quotas from Namibia to Angola were then illegally sold to Samherji contrary to the spirit of the agreement.
The fraudulent scheme came to light in November 2019 after news channel Al Jazeera published its “Fishrot files” documentary resulting in the arrests of Esau, Shanghala and their cohorts. They remain in custody after several unsuccessful bail applications and appeals.  The second Fishrot case referred to as the Fishcor matter will make a first appearance in the High Court on 22 April for pre-trial when Esau, Shanghala, Tamson, James, former CEO of Fishcor Mike Nghipunya and Mwatelulo will appear on charges ranging from racketeering to fraud and money laundering.

Two further accused, Otneel Shuudifonya and Phillipus Mwapopi were added in December to the indictment. They are accused of illegally benefitting from N$75.6 million earmarked for government objectives through the state-owned Fishcor.
The accused are represented by Richard Metcalfe, Florian Beukes, Milton Engelbrecht, Trevor Brockerhoff, Lucious Murorua and Gilroy Kasper. Prosecutor Marondedze is assisted by Cliff Lutibezi.
– rrouth@nepc.com.na