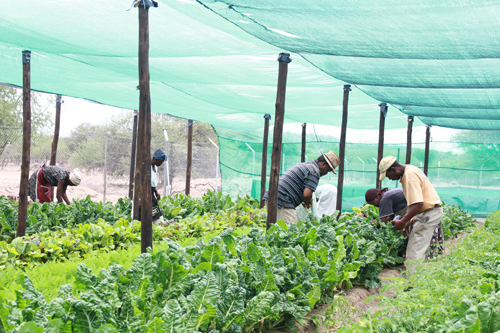 Some farmers have sold their surplus grains to commercial millers, individuals, and or Agricultural Marketing and Trade Agency (Amta).
In the northeastern regions, most households interviewed indicated that they are still dependent on last season’s harvest, which is expected to sustain them till the next harvest.

Similarly, food security in the north-central regions is also still satisfactory, following a very good crop harvest received last season.
Many farmers recorded a bumper crop harvest which is expected to sustain households to the next harvest.
Food security elsewhere in the country is also said to be fine, given a substantial improvement in agricultural production last season.
However, in the south, central and western parts of the country, in particular, //Kharas, Hardap, Erongo, south of Khomas, and south of Kunene, the situation remained fragile following the late and poor rainfall received last season.

Therefore, the report suggests constant monitoring and interventions, especially for the vulnerable groups are needed in these areas.
Meanwhile, the country restocked the National Strategic Food Reserves (NSFR) between May and October 2020.
As of 31 December 2020, the NSFR stocks were very low, representing only 14.05% of the overall holding capacity.
The NSFR stocks consist of white maize where 1 183.74 metric tons is in Katima Mulilo, 2 033.55 metric tons in Rundu, and 1 417.32 metric tons at Okongo.

Moreover, Omuthiya and Tsandi silos are currently empty.
Although many cop producers recorded bumper crop harvests last season, farmers are hesitant to sell their grains since they are still recovering from the 2019 devastating drought and are not certain as to whether the 2020/2021 cropping season will be good or will just be yet another drought.

Grazing conditions remained fairly okay in most parts of the country; following good rainfall received last season and was noted to range between poor and good in most areas. However, the south and the western part of the country (//Kharas, Hardap, Erongo, mostly Kunene region) grazing conditions are worrisome due to late and poor rainfall received last season.
In the north-eastern regions (Zambezi, Kavango East, and Kavango West) grazing ranges between fair and good to very good in the flood plain areas and areas along the rivers, while very good in the inland. Water for both livestock and human use is abundantly available with rivers, streams, boreholes, pipelines, and ponds being the mains sources.

Grazing is also good in the north-central regions as well as in the central and eastern parts of the country.
Overall grazing condition in Otjozondjupa region was noted to be poor, except in some areas such as Okondjatu, Otjituuo, Outjo, Tsumkwe and Okahandja.

In the //Kharas region, grazing condition was predominantly very poor.
Similarly, poor grazing conditions were reported in Kunene, especially at Khorixas, Erwee, Kunene north, and the Outjo area, while in Omaheke, around the Aminuis area, veld fires have destroyed huge areas of rangeland, leaving the grazing in a poor condition. -anakale@nepc.com.na