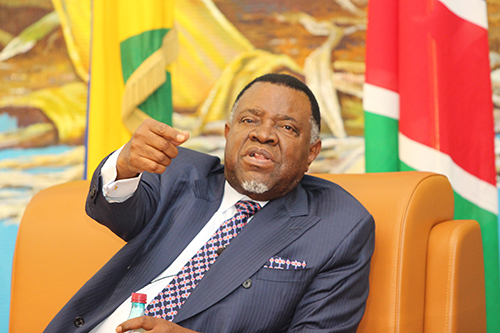 As much as Namibians want to see him intervene and help resolve the ongoing infighting among local football executives, his hands are unfortunately tied, President Hage Geingob said yesterday.

Geingob made these remarks during his announcement that the 2021 edition of the Dr Hage Geingob Cup will, like last year, not take place due to Covid-19 restrictions, and that the N$3.4 million sponsorship monies earmarked for the tournament will again be diverted to various needy orphanages across the country.

In his brief keynote address, Geingob stressed the importance of unity and selfless leadership in the country’s pursuit of professionalising football and sport in general, saying continuous infightings are to be blamed for the decaying state of local football.

He was referring to ongoing squabbles among executive committee members of the Namibia Football Association (NFA), as well as between the NFA and the Namibia Premier League officials.

The Head of State reiterated that he is unable to intervene, as Fifa statutes and regulations prohibit political leaders and political office bearers to mingle themselves in football issues.

“We don’t have football in the country; our stadiums are down, and people are playing in South Africa. I was told to intervene with what’s going on in football as the NFA patron, but please take note, Fifa does not allow politicians to interfere in football squabbles.

“We [the government] should give money to football but we cannot interfere to say who is right and who is wrong. So, with that one, we are quiet, although we are really disappointed. We would like to see the premier league being played,” he said.

Geingob went on to appeal to the leadership of local football to put their differences aside, and work towards the wellbeing of the players and the development of the game, as government has a huge responsibility to professionalise sport.