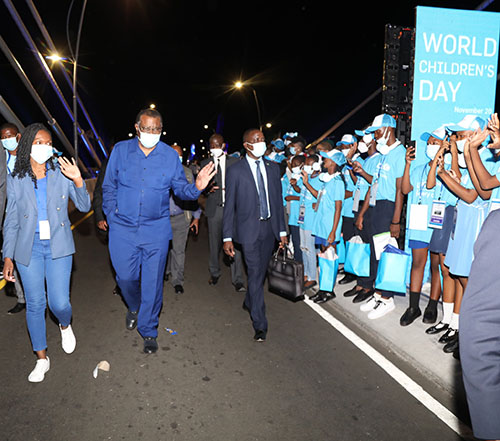 Geingob made this call on Saturday at Kasane, Botswana during the commemoration of UNICEF’s World Children’s Day on 20 November 2021.

The day themed ‘The future we want…. taking bold steps to ensure that every child has the best opportunities and skills’, was attended by Botswana’s president Mokgweetsi Masisi, Zimbabwe’s president Emmerson Mnangagwa and Zambian president Hakainde Hichilema.

Children from the four countries participated in a panel discussion with the heads of state, in which they raised issues affecting them as children and young people in their respective countries.

The special event, the first of its kind to combine a dialogue between children and heads of state, was attended by children and young people who had an opportunity to ask questions to the presidents.

“As leaders and parents, we are on this day and occasion demonstrating our shared commitment to the welfare and progress of children and young people. The fact that we are here at this special event with children tells a story in itself,” Geingob said.

He said Namibia has never shied away from creating opportunities for children and young people.

According to Geingob, the country has invested in the progress and education of the Namibian child for a brighter future.

“After all, we left Namibia as young people to fight for freedom and importantly to gain an education as a means towards a better future,” he added.

Therefore, Geingob said, Namibia continues on a path of inclusion of children and young people, “not because we are told it is the right thing to do, but because we are convinced that it is our moral obligation as parents and leaders.”

To show solidarity with World Children’s Day, buildings, monuments and landmarks across the globe were lit up in blue, including the Kazungula Bridge, which links Botswana and Zambia, and by extension Zimbabwe and Namibia.

Masisi, who is the SADC Global Leader for Generation Unlimited, noted that the four heads of state agreed to create a network of leaders to mobilise and rally for the cause of children.