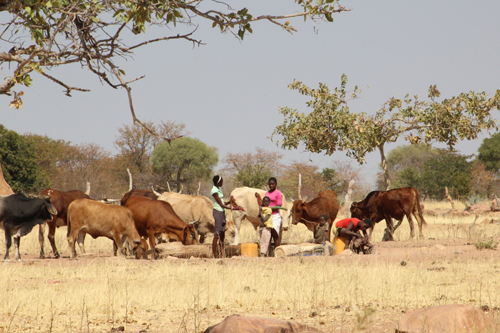 OSHAKATI - The Ministry of Agriculture, Water and Land Reform is expected to spend about N$97 million to roll out the Foot and Mouth Disease (FMD) vaccination to mitigate the further spread of the virus in the Northern Communal Areas (NCAs).
The procured budget includes N$48 million for at least 17 million FMD vaccine doses for an approximate 800 000 herds of cattle in the NCAs and 150 staff that will be implementing the programme.

The minister was speaking at a meeting with the regional governor of Oshana, the traditional authority leadership and the farmers union on Friday.
Similar meetings were held in Oshikoto and Omusati regions respectively.
The minister said in Oshana region, the ministry of agriculture is almost done with administering the first dose for the cattle reached, while in Oshikoto they have already moved to the second dose.

Since the FMD outbreak was declared on 6 January 2021, the ministry initiated measures to limit the further spread of the virus, including restriction to move and slaughter livestock in the NCAs.
A three-month quarantine period that has been declared is expected to lapse on 6 March 2021.
Meanwhile, the minister announced that the ministry has lifted the ban on the transportation of wood and grass as well as sheep and goats.

“They can now be moved from and into the area, slaughtered and consumed. We are trying to make life easy but for cattle, we need to rather be strict still and the restriction is in place until the three-month quarantine period in the area has lapsed,” said Schlettwein.
While the ministry is cognisant of the hardships endured by the farmers during these three months quarantine period, the agriculture minister said the restriction of cattle will aid the farmers to contain the virus.

He said failure to adhere to the set regulations will severely impact the ability to make money out of farming.
“If we break the rules, the disease will spread faster to areas where it was not and it will negatively affect farmers. It will widen our restricted area and it will severely restrict the movement of cattle and animal products,” stressed the minister.
During the same meeting, the councillor for Uukwiyu-Uushona constituency Andreas Amundjindi requested the ministry to increase the crush-pens in the region.

According to Amundjindi, the exercise will cut on the long distance trekked by farmers and their livestock for vaccination, which will subsequently ensure that all livestock is vaccinated.
The region now only has 163 crush pens and about 2 000 in the NCAs.
Following the drought experienced in the last year, the livestock in Oshana has decreased to almost half from 160 000 to just over 70 000 now.
nashipala@nepc.com.na