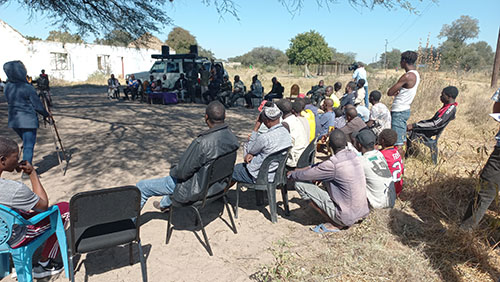 MUITJIKU – With the increasing human wildlife conflict, there is a need to engage affected communities to hear their plight and also educate them on what to do once they or their relatives become victims.

On Tuesday, the team led by the environment ministry’s spokesperson Romeo Muyunda was in Muitjiku village, about 210 km east of Rundu in Mukwe constituency where community members shared their human-wildlife conflict experiences, many noted that they have been heavily affected and have not received any assistance from government despite putting in their claims.

“As residents of Muitjiku, we are suffering from elephants, our crop fields are raided by elephants and it’s a big loss to us. Our applications for assistance from government in regards to offset payments have not been attended to all these years, but we hear in different areas people at least get something to cover some of the damages,’’ said one of the village elder Lawrence Dinyando.

Dinyando noted that community members at Muitjiku do not get compensation from the ministry even when their livestock have been killed by predators like crocodiles.

Other community members also complained about the low gazetted payments for agricultural services in their fields.

They said, to cultivate a hectare would cost them about N$4 000 which includes payment for the tractor service, seeds and paying people to weed the field among other activities before one can reap the harvest.

“We came here from the head office to engage with you so that we understand how to deal with the human wildlife conflicts. We also need to know how you are coexisting with wild animals,’’ Muyunda said during the community engagement.

The ministry is also concerned with the increasing human wildlife conflict thus it felt that as stakeholders, we must come together and see how to resolve the situation, he said.

After the engagement in Muitjiku and Shadikongoro on Tuesday, the ministry officials moved to Gcude village in Ndiyona constituency on Wednesday morning and the same day in the afternoon visited Mupapama village in Mashare constituency. On Friday, the team visited a San community at Bravo settlement in Mpungu constituency in Kavango West.

“The sessions were informative as communities engaged the ministry progressively expressing their problems, experiences and recommendations. We have noted that some of the concerns were based on the lack of understanding of the policy provisions,’’ Muyunda noted.

“We have taken the liberty to clarify these,’’ he said.

Muyunda in an interview with New Era said during these engagements, they noted that in some communities, there is no information on how they can utilise the wildlife that’s giving them problems. These communities have wild animals causing destruction to their properties in their areas but no means to utilise them to derive benefits.

“Our principles of conservation are based on the fact that the benefits of conservation must outweigh the cost. We have encouraged those communities to establish recognised structures for them to start deriving benefit from wild animals,’’ he said.

“Other concerns are really about the offset payment which most expressed it’s not sufficient to assist the livelihoods of those affected. We have clarified that offset payments are not compensation but assistance to affected community members. However, we have taken note of the sentiments and recommendations made in this regard and we will take these recommendations to the management of the ministry to decide what is best,’’ he noted.

Overall, Muyunda noted that they were happy to have engaged communities, as they now have a clear understanding of what they are going through. “We have seen the emotions, frustrations of the people. One can see that these engagements were needed. Human-wildlife conflict is one of our biggest challenges, it requires collective efforts between stakeholders,’’ he said.

We were able to educate communities on their roles and what’s required of them to mitigate this challenging phenomenon. Some of the communities we engaged; one could observe that the understanding is that human wildlife management is the sole responsibility of the ministry. We are confident that with awareness activities we managed to change that perception, he noted.

“Having said that, I also wish to say that human wildlife conflicts affect the livelihoods of many, politicising it will be insensitive to the plights of those affected. Rather, we call upon stakeholders to join hands with government in mitigating and managing the issue,’’ he said.

Prior to visiting the two Kavango regions, the ministry officials were in Zambezi and visited Nfoma, Bukalo, Linyanti, Chichimani and Sangwali communities.

“This engagement will be ongoing to ensure role players are on par. Planning to engage communities in Kunene region has also started,” he noted.