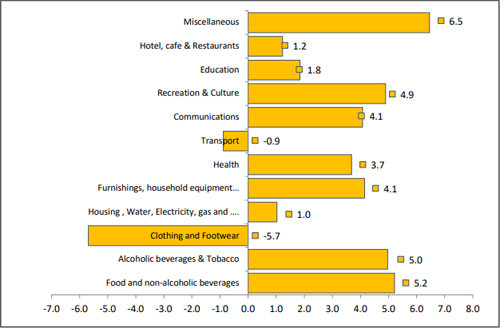 NSA CEO Alex Shimuafeni said the inflation rate measures the change in the consumer price index for the month under review to the previous month, month-on-month change, as well as to the corresponding month in the previous year, year-on-year change.
“The inflation rate is vital for purposes of economic policy-making, especially the conduct of monetary policy and to consumers in general,” explains Shimuafeni.

The annual inflation rate in the Khomas region was estimated at 3.2% compared to 1% recorded in January 2020.
Monthly, the inflation rate stood at 1% compared to 0% recorded during the previous month.
The analysis of the average retail prices for some of the basic products consumed by the households for January 2021 indicates that for a bag of maize meal (2.5 kg), the Khomas region recorded the lowest price of N$33.92 while zone three which is //Kharas, Erongo, Hardap, and Omaheke recorded the highest price at N$36.09.

For cooking oil (750 ml) the report stated that consumers in the Khomas region paid the lowest price at N$19.98 while the highest price was observed in Zone 3, //Kharas, Erongo, Hardap, and Omaheke again at N$21.40.
-mndjavera@nepc.com.na