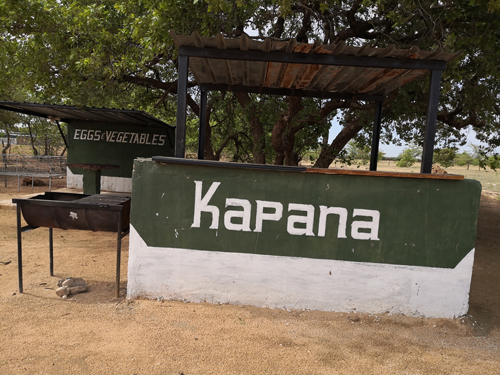 OKAPA – Almost a month since the first case of the foot-and-mouth disease (FMD) was detected in Oshikoto region, kapana vendors are still without an income, as they are not allowed to operate.

Various kapana vendors say the closure of their business has not only affected their livelihood but that of their employees as well.
The effects are much more severe than what they have imagined, as they have now gone for a month without an income.
Izata Nganga, who sells meat at Okapa village along the Ruacana road in Omusati region, said his business is badly affected.
“My income has been cut; kapana was my income, but now that it has been shut down, life is difficult,” said Nganga.
Nganga, who has been in the trade for two years now, said the kapana business is good – and with his income, he was able to feed his family.
On average, he used to slaughter a goat every two days.

Apart from selling kapana, Nganga said his carwash has also been badly affected.
“Customers would wash their cars while they are eating kapana, but since there is no kapana, there are no customers bringing their cars to be washed,” said Nganga.

Equally, selling eggs and vegetables at the same spot has also come to a standstill because no one stops at the once-popular site.
Meanwhile, Maria Johannes, who also sells kapana around Ongwediva, said with no livestock being slaughtered, the business has been crippled.

Johannes pleads that the ministry speeds up its surveillance and to at least quarantine the affected livestock for the businesses to resume.
“This is our life – our income. How do we feed our families if our income has been cut?”
FMD was first detected at the Onamulunga crush-pen at the end of December, followed by another case at in the Okongo constituency in Ohangwena region.

In January, a further case of FMD was detected at Okadhiya in the Uuvudhiya constituency.
In the meantime, Oshikoto, Ohangwena, Oshana, Omusati and Kunene north are now part of the FMD protection zone and are now declared disease management areas.
- nashipala@nepc.com.na