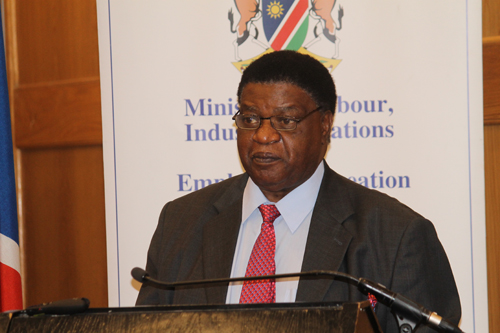 The Ministry of Labour, Industrial Relations and Employment Creation last week held a two-day induction workshop in Windhoek for the five newly appointed five of the Wage Commission.

The Commission was appointed to investigate the possibility of introducing the National Minimum Wage (NMW), with the aim to improve the wages of the lowest-paid workers; reduce income inequality; alleviate poverty and improve individual and household income, create taxation certainty and achieve a decent standard of living for all.

The two-day induction was aimed at engaging the Commission on its work, unpacking terms of references, and sharing both national and international experiences on national minimum wages mechanism setting.

Minister of Labour, Industrial Relations and Employment Creation Utoni Nujoma, in his keynote address, said the work of the Wage Commission can result in the improvement of the living standards of hundreds or even thousands of people.

“While the solution to the problem will not be based on minimum wages alone, the minimum wage can make a difference,” Nujoma stated.

Speaking at the same occasion, Director for Labour Services Aune Mudjanima indicated during a presentation on the Namibian Experience with setting Minimum Wages and Basic Conditions of Employment that the Social Security Act of 1994 (No.84 of 1994) speaks of a National Pension Fund and Medical Benefit Fund that would be complementary to the determination of an NMW.

Additionally, the International Labour Organisation (ILO) Standards Minimum Wage Fixing Convention, 1970 (No. 131) requires member states to establish a National System for a minimum wage. Although Namibia has not ratified the Convention, it is implementing and adhering to it, Mudjanima said.

She noted that having an NMW would reduce labour complaints and disputes, adding that it is sometimes difficult to enforce laws in sectors where there is no minimum wage and particularly in the informal sectors where there are no formal contracts in place.

Addressing the members of the Commission, its Chairperson Dr Marius Kudumo said members should use their expertise and should be open-minded, not prejudiced but listen to the inputs the public will make.

“There will be some dialogue but there should be consensus on findings and recommendations,” Kudumo said.

The deadline for written presentations by interested persons concerning the NMW and related supplementary Terms and Conditions of Employment, including matters outlined in the Terms of Reference of the Commission to Wages Commission Secretariat is not later than 30 June
2021.

The Commission is expected to conclude its task by 31 August 2021.