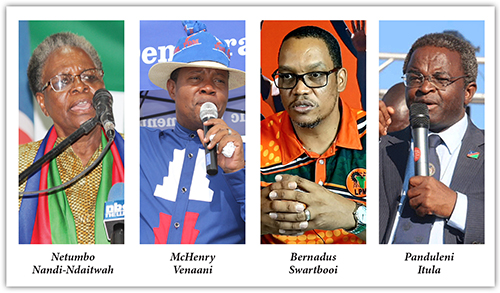 Political parties are seemingly embarking on early campaigns by aggressively coming out of their cocoons to snap up potential members as the political landscape heats up ahead of the 2024 general elections.

Parties are thus leaving nothing to chance in their efforts to remain relevant in the eyes of potential sympathisers. Parties such as the Landless People’s Movement (LPM) have been on a recruitment drive in northern Namibia as far as last
year.

The northern regions are a Swapo stronghold, with rural voters mostly credited for delivering victory to the ruling party in those parts of the country. Similarly, the Independent Patriots for Change (IPC) recently formally launched its campaign for the 2024 Presidential and National Assembly elections.

The Popular Democratic Movement (PDM), which gained 16 parliamentary seats during the 2019 vote, has also been criss-crossing the country by targeting rural voters in the two Kavango regions as well as in Omusati, Oshana and Ohangwena. The ruling Swapo has likewise in recent weeks also organised a series of drive-through initiatives aimed at expanding its membership base.  Swapo faces one of its toughest electoral tests in the upcoming elections, while it also has to clear an intra-party contest later this year, which will see the election of the top four leaders in the movement. According to political commentators, early campaigns by political parties are necessitated by the shrinking political imprint of Swapo that has provided the opposition with political ammunition to further erode their dominance in the 2024 elections. Swapo lost control of approximately 30 town and village councils across the country during the 2019 regional council and local authority elections, including economic centres such as Windhoek, Oranjemund, Lüderitz, Swakopmund and Walvis Bay.

According to political analyst Rui Tyitende, Swapo’s poor performance in those elections emboldened opposition parties. “It is important to note that the political landscape in Namibia has shifted,” said the University of Namibia-based academic. “Swapo’s electoral decline in the last National Assembly and presidential elections and the regional and local authority elections provided opposition parties with political ammunition to further erode its dominance, come 2024.” He added that Swapo was aware of its shortcomings, and is pursuing a path of reconnecting with its key constituents. “If the governing party fails to address the socio-economic grievances of most Namibians, its political dominance over Namibian politics will dissipate in the near future,” he added. Furthermore, Tyitende said there is a level of consciousness that has developed amongst the youth as they are the victims of an ailing economy, a high unemployment rate and poverty. “Ignoring this important political constituency will be to the detriment of any political formation,” he observed. Another commentator, Gerson Sindano, said the rhetorical dynamics in the Namibian political theatre seem to be changing. Rhetorically, he explained, political messaging requires one to explain and persuade unwilling swaths of potential voters. “Various political parties in Namibia are beginning to understand the significance of the early campaigns,” he added. Also, he said, in its 2015 performance reports on the regional and local authority elections, the Electoral Commission of Namibia (ECN) observed that Namibians, particularly young people, were less interested in participating in elections. The ECN report also indicates that only 40% of the 1.2 million registered voters turned up at the polls. Interestingly, young people were the least participants in the election. However, he said if the current early campaigns are anything to go by, there seems to be a surge in the number of young people showing interest in political matters. “Whether this surge will translate into votes remains to be seen,” he noted. According to analyst Ndumba Kamwanyah, a lot is at stake for the 2024 elections because it is likely that it will be a close-up vote.  “Parties don’t want to leave it to chance, and there are good reasons why they should not leave it to chance. The electorate’s landscape is changing in the sense that voters are no longer driven by loyalty, but by bread and butter issues,” he said. Secondly, parties will face angry voters due to the economic situation on the ground, ready to punish empty promises. “Young people will be the majority voters in 2024, and parties know that - hence the spiked interest in courting young voters,” he said.  He added that what the nation is observing is the battle of visibility in that parties want to be seen and be heard, instead of waiting for 2024. “This battle of visibility will likely be won by a party that has resources, or uses the resources efficiently to sustain the process up to 2024,” he continued.